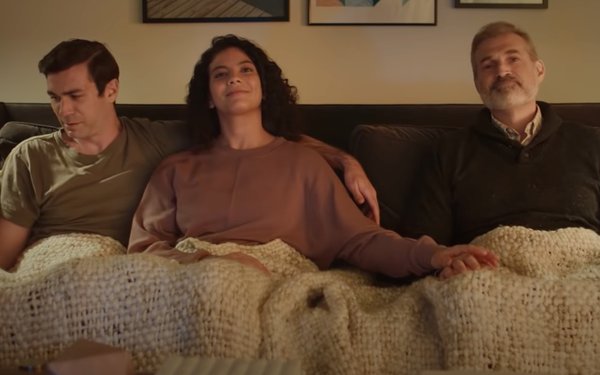 Snickers is employing edgy humor depicting the “surprise problems and pitfalls” of everyday life to introduce its latest creation: the Snickers Peanut Brownie.

In addition to targeting the general population, the campaign for the Mars brand uses custom creative tailored to Hispanic consumers across a broad array of audio and digital media plus linear and connected television.

In a spot titled “Open,” a boyfriend who has agreed to keep a relationship “loose and open” realizes he wasn’t sure what that actually meant as the camera cuts to an older gentlemen sharing the couch on the other side of his girlfriend.

“Then you met Glen,” says the voiceover as the girlfriend clasps Glen’s hand and the boyfriend reaches for “a comforting brownie hidden in a Snickers.”

Switching to workplace social miscues, a woman uses the nickname Stanimal while introducing new two office team members—including a dark-haired, bearded man who responds “Did you just call me Stanimal?”

Voiceover: “Turns out, they only use that name behind Stan’s back.”

In a commercial from the Third Ear agency, a Hispanic girl asks her Anglo boyfriend if he’d like to enter her home. Possibly expecting some alone time, he follows her in—only to encounter a room full of her relatives.

“Whenever we do work that’s designed for our Hispanic consumer, we’re always thinking about that insight that’s going to be most relevant to their family,” Snickers senior director Josh Olken tells MarketingDaily.

Humor and the social impacts of Covid-19 were common elements of this Snickers commercial from last summer. Surprise visitors to a couple’s home encounter a man in his underwear because he was expecting a Zoom meeting.

The current campaign—in which no one wears masks or refers to the pandemic—doesn’t “specifically address the moment we’re in right now,” says Olken. “We always want to be able to tell stories that have kind of a universal appeal.”

The general-market campaign spots are running on a variety of cable and sports TV networks plus Amazon, Roku and Hulu.