On Syfy, Alien Takes Up Residence In A Tiny Town 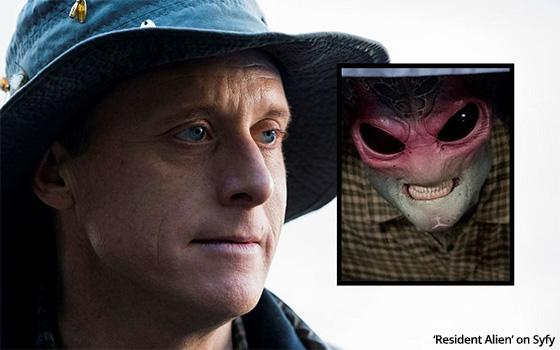 A wholly original new drama series takes up residence this week on Syfy.

It is called “Resident Alien,” a title that contains a mild double meaning. The titular character is indeed an alien -- the outer-space kind -- who accidentally crash lands in the Colorado Rockies.

With no way to return home, he feels it prudent to assume the identity of a local resident who just happens to be doctor. So the alien becomes the doctor, which is what the word “resident” seems to be referring to.

The problem is, this alien knows nothing about how to be a doctor in a human world. In fact, he knows almost nothing at all about everyday life on Earth -- except what he learns from watching old reruns of “Law & Order” (an imaginative touch).

Thus, this small Colorado town’s resident alien is seen in the series’ premiere -- airing this week on Syfy -- going about his business among the townspeople with extreme care. He says almost nothing and regards everyone and everything he encounters with a cold, dispassionate reserve.

And yet, in the process of saying and doing almost nothing in his interactions with others, he exudes an unlikely charisma.

While watching the premiere episode of “Resident Alien” provided by Syfy, I was reminded of the old movie “Being There,” in which Peter Sellers played a man who seemed to possess no inner life at all. But in spite of that (or because of it) the air of mystery that surrounded him made him intriguing to men and irresistible to women.

But that is where any similarity between this resident alien and the “Being There” character named Chauncey Gardiner stops.

In “Resident Alien,” the alien in the title is on a mission from his distant planet that is not entirely revealed in the premiere episode, although various hints suggest that his presence on Earth is anything but benign.

It might even involve exterminating every human being on the planet, according to one such hint. A global holocaust like that would certainly be a very serious and tragic event. And yet, much of the series’ premiere of “Resident Alien” plays like a dark comedy.

Indeed, the whole show seems to be a balancing act, starting with actor Alan Tudyk's uncanny portrayal of the outer-space alien turned-local doctor who knows nothing about human medicine.

His capturing of the duality of the show's Chauncey Gardiner-esque lead character is the linchpin of the series and, by the looks of it, his performance is a complete success.

“Resident Alien” is another in a growing number of TV series adapted from comic books or graphic novels. This one is a worthy addition to the canon.