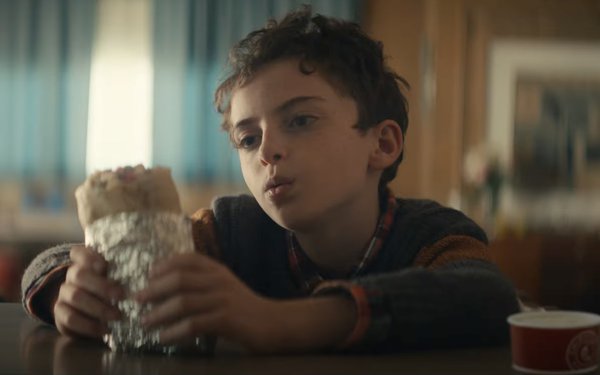 It seems Chipotle is the only restaurant chain so far to announce it will advertise on Super Bowl 2021—a first-ever move by the 27-year-old company to amplify its support of local farmers and use of responsibly sourced ingredients.

A 30-second spot from the Venables Bell and Partners agency titled “Can A Burrito Change The World?” will run during the second quarter of the Feb. 7 game on CBS.

In the commercial, a young boy munching on a burrito asks his sister, “What if this could change the world?”

Her response: “You are so weird.”

It’s the latest in a long-running series of “food with integrity” initiatives from Chipotle that aligns its brand values with issues ranging from reducing carbon emissions to saving water and supporting local growers, according to CMO Chris Brandt.

Asked why the company chose the Super Bowl audience, Brandt adds, “We didn’t necessarily set out to do a Super Bowl spot.”

Nonetheless, the world-changing burrito spot “really fits the Super Bowl. Advertising on the Super Bowl is a different animal and I think you want to talk more about your brand values. It’s the only stage where the TV commercial is as big a role as it is for the game itself.”

Farmers are an important focus for Chipotle because “we buy more local ingredients than any other restaurant group," Brandt says. "The farmer is the American ideal. It’s what a lot of this country was founded on, and people have a soft place in their heart for farmers.”

On Super Bowl Sunday, the chain will donate $1 from every delivery order to the National Young Farmers Coalition—with free delivery for orders placed on the Chipotle app and website. People who order from the app or online can round up their total bill to the next-highest dollar, with the difference donated to the NYFC through the end of February.

According to Brandt, farming was in a crisis before the onset of Covid-19. “The average farmer is around 60 years old, we’re losing way more farms than we’re putting back in and it’s really hard to be a farmer.”

In 2016, Chipotle created the Chipotle Local Grower Support Initiative to provide financial support to small- and medium-size growers of fresh produce. The company says it has pledged $5 million over the next five years to assist a new generation of farmers.

“We’ve been with many farms since the company’s founding, and so they’ve grown along with us,” says Brandt.