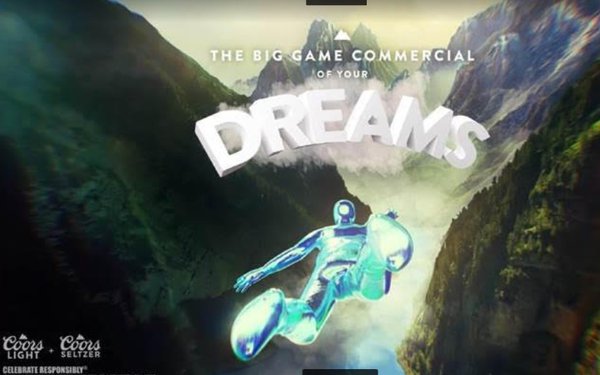 Molson Coors will tweak rival Anheuser-Busch at this year’s Super Bowl with what it says will be the first Super Bowl commercial “you can only see the night before game day, in your dreams.”

Is “The Big Commercial Of Your Dreams” a crazy idea? Or crazy like a fox?

Using something called targeted dream incubation -- “the science of guiding dreams” -- Coors Light and Coors Seltzer says it can shape your subconscious so you can “see” the commercial when you’re catching your zzzs.

Potential dreamers will be instructed to watch a 90-second stimulus film three times and then sleep with a soundscape playing for eight hours, to trigger the imagery from a Coors Super Bowl ad.

The whole thing is also a jab at Anheuser-Busch, which has had exclusive beer commercial rights to the Super Bowl for several years. Or, as the Molson Coors release says, “A certain other beer brand seemingly controls the ad space.”

The history around the Super Bowl seems painful for Molson Coors. Two years ago, on the evening before Michelle St. Jacques officially began as the company’s chief marketing officer, she saw the Super Bowl ad in which Bud Light’s “dilly-dilly” king tweaked Coors Light and Molson Coors brand Miller Lite for using corn syrup to make their beer.

That claim seemingly took advantage of the confusion between corn syrup and high-fructose corn syrup, a no-no to health-conscious consumers -- and led to lawsuits and what were labeled The Corn Syrup Wars between Anheuser-Busch and Molson Coors.

Time passed. Molson Coors, which moved from Denver to Chicago, enlisted Dr. Deidre Barrett, an author and psychologist known for her work on dreams and imagery. Among other credits, she’s done research on helping PTSD victims calm their nightmares.

“I’ve studied dreams and methods to influence them throughout my career, but working with the artists of the Coors Dream Project was a novel opportunity to craft audio and visual stimuli that viewers could use to trigger specific dream content,” says Dr. Barrett, in a statement the beer maker provided.

“We saw the results come to life in the Dream Lab trial run when participants reported similar dream experiences including refreshing streams, mountains, waterfalls and even Coors itself,” she adds.

Consumers can now see a behind-the-scenes video of the Big Game Dream on CoorsBigGameDream.com. The full length eight-hour stimulus soundscape and film will be available on Feb. 3 for fans to dream on. Short ads will start showing up on digital platforms leading up to the game on Feb. 7.

A Molson Coors blog says the idea, from the DDB agency, was a reaction to the stressors of the pandemic, which have led to bad dreams over the last 10 months. Coors, with its “Made to Chill” tagline, is the antidote to that.

The “Big Commercial of Your Dreams” could also be an ironic dig at the Super Bowl spectacle itself. With so many millions watching the game on mobile devices, the Super Bowl is not the singular event it once was.

And the anxiety of this time (pandemic+protests+Capitol insurrection, etc.) along with uncertainty whether the game would actually be played, has reportedly left sponsors struggling to find the appropriate message and tone for their ads, or deciding to drop out altogether.

Though brands like Bud Light and Michelob Ultra still scheduled ads, Anheuser-Busch’s flagship brand, Budweiser, will be a no-show for the first time in 37 years. That means those crowd-favorite Clydesdales may not be seen.

Then again, though they’re not called Clydesdales, a proud team of beer-toting horses are showing up in an ad for Samuel Adams Wicked Hazy  beer that will be shown on local TV during the game in Boston and New York. It’s not quite the same, however.