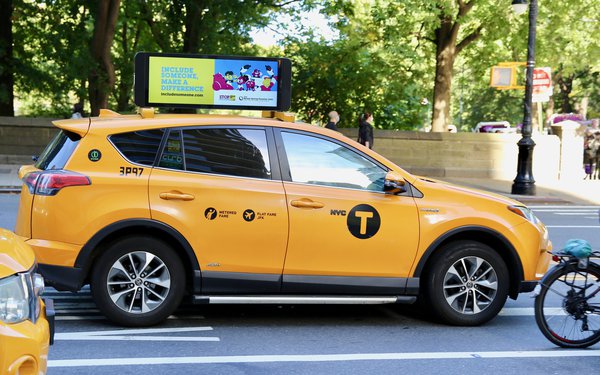 Demand for ads on Taxi cabs took a big hit at the start of the pandemic last year but it's making a comeback according to Curb Taxi Media (Curb), the largest provider of taxi media nationally.

Curb had its entire digital taxi top inventory fully sold out for Q4 2020, a first since the start of the pandemic. Curb’s footprint includes 1,200 digital screens (NYC), 15,000+ static tops, and 22,000+ TaxiTV screens nationally.

This stronger than expected demand was driven by holiday shopping and the explosion of video content networks, says Chris Polos, vice president, Curb. He adds even local businesses were pursuing more bundled options, leveraging both Curb’s digital tops and TaxiTV to hyper-target their audiences using features like geo triggers.

This rebound, moreover, is revealing some changes in how advertisers approach this category, he says. Typical Curb advertisers like tourism and hospitality have continued to pull back spending while others that are less dependent on in-person experiences have scaled up campaigns, such as financial services and e-commerce. “It’s a bit more nuanced than a categorical shift,” says Polos.

Entertainment advertisers have shifted within brand categories. Live programming like Broadway shows, for instance, remain on hold, but there is an uptick in demand from other entertainment verticals, like streaming services and networks, he says.