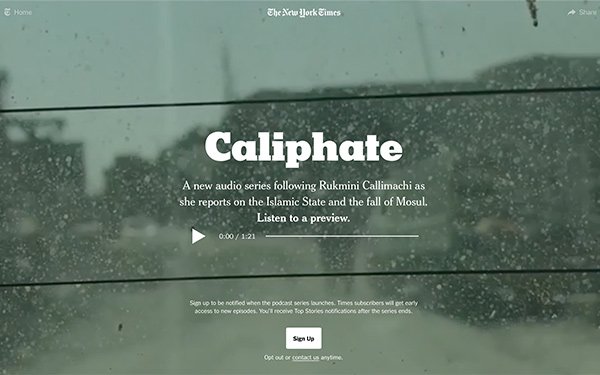 The New York Times assigned an editor to oversee the vetting of stories from its fast-growing audio unit, which recently faced criticism for its “Caliphate” podcast.

Cliff Levy was promoted to a new role as deputy managing editor after leading the newspaper's Metro section since 2018. Before assuming the new role, Levy has an interim assignment as an adviser to Sam Dolnick, who leads the audio unit and film and television projects, and executive audio producer Lisa Tobin.
"Cliff will work closely with Sam and Lisa to expand the department’s structure to match its ambitions and growth and the crucial role that audio plays in our journalism," Executive Editor Dean Baquet and Managing Editor Joe Kahn said in a letter to staff.
Levy's promotion follows revelations that "Caliphate," a prize-winning podcast about terrorism in the Islamic State, contained factual errors in its reporting. The newspaper last month issued a lengthy correction saying the series included “false or exaggerated” claims from one of its central figures.
The controversy lingered into this month after the Public Radio Program Directors Association accused the newspaper's employees of “lapses in judgment” in trying to defuse criticism of the series. In response, the NYT admitted mistakes in how it handled efforts to correct the reporting.
The newspaper's audio unit produces "The Daily," a podcast hosted by Michael Barbaro that gives a rundown of the newspaper's biggest stories. The show routinely tops the rankings of most downloaded podcasts measured by Podtrac.
The NYT has been more aggressive about expanding its podcast programming, last year buying the producer of the hit podcast “Serial” for approximately $25 million in cash and $9.3 million of contingent considerations, according to a public filing. The audio unit also recruited technology columnist Kara Swisher and policy reporter Ezra Klein to host podcasts.
Levy won two Pulitzers as a reporter, and the NYT's Metro section was awarded another Pulitzer for its investigation into the taxi industry during his tenure as editor.
The newspaper is currently looking for a new editor of the Metro section, Baquet and Khan said in the letter.