Fewer Fans In The Stands Pays Off For Super Bowl Sponsors 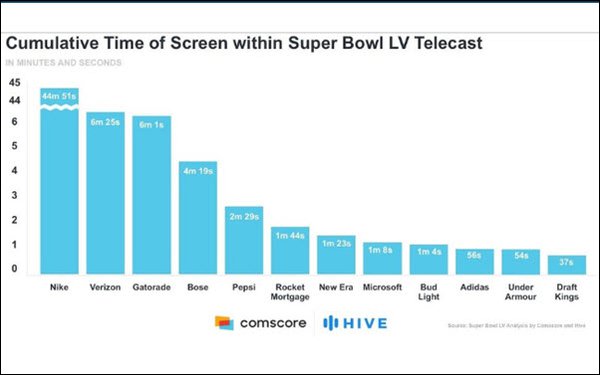 Turns out that having fewer fans in the stands as a result of the pandemic was a good thing for at least one group with skin in this year’s Super Bowl game: the official league and broadcast sponsors.

Having fewer fans in the stadium not only opened up new opportunities, like the branded tarps placed over the seats around the field; it also seems to be the driver behind more exposure time for sponsors’ signage, product placements and digital billboards.

“The cameras focused more on the field in place of the celebrity cameos and crowd shots that typically get air time during the broadcast,” says Dan Calpin, president of enterprise AI solutions provider Hive, which partnered with Comscore to analyze the advertising and marketing trends in this year’s game.

Excluding network promotions as well as local ads, this year’s game had a total of 39 minutes, 30 seconds of advertising time, compared to 42 minutes, 40 seconds of national ad time in last year’s game, according to Hive’s logo detection model.

In Super Bowl LV, Gatorade (branded bottles, cups, coolers and towels) and Bose (coaches' headsets) had a combined total of more than 10 minutes of time on screen, up nearly 60% from their 6 minutes, 30 seconds in last year's game, according to the Comscore/Hive analysis.

That continued a trend from the regular season and playoffs, when league sponsors Gatorade, Bose, and Microsoft — which each had branded products and signage on the sidelines — collectively experienced a 33% increase in their cumulative seconds of screen time per hour compared to the pre-COVID 2019 season.

During this year’s game, Nike alone, with swooshes visible on uniforms, cleats and other sideline apparel — amassed 44 minutes and 51 seconds of screen time during the telecast. (Chart above.)

That was more than the entire total of national advertising time during the game: 39 minutes, 30 seconds (excluding network sponsorships, as well as local ads), according to Hive, which clocked Super Bowl LIV’s total national ad time at 42 minutes, 40 seconds.

Verizon and Gatorade each got more than 6 minutes of exposure, and Bose and Pepsi got more than 4 minutes and 2 minutes, respectively.

Together, 24 brands visible on screen for at least 5 seconds collectively earned more than 70 minutes of exposure during the telecast, roughly 85% more than the game’s total national advertising time.

In total, 12 brands surpassed 30 seconds of cumulative brand exposure within the Super Bowl LV telecast (not including the pre- and post-game shows and excluding league, team and network brands).

Calls to Action, New Products, Celebs Down from 2019

Just 29% of this year’s national Super Bowl ads included calls to online action in the form of references to websites, apps or hashtags — down from 56% last year, the analysis found.

Similarly, only 29% of this year’s ads were for new products, down from 40% from last year. 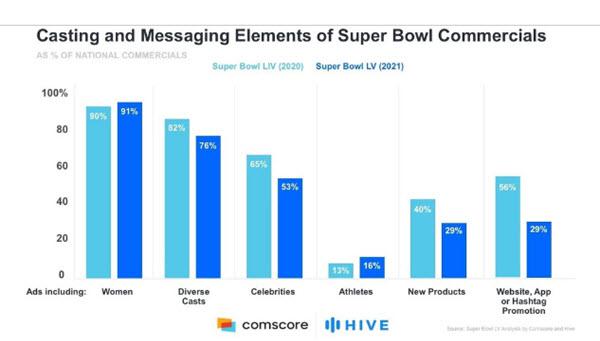 Just two ads — Bud Light and Bass Pro Shops & Cabela's —referenced any of the events of the past year.

And while pregame headlines highlighted longtime Super Bowl advertisers who opted to sit out this year's game, returning advertisers from last year's telecast actually accounted for a greater portion of total national ad time than last year: 56%, versus 52%. Anheuser-Busch again led the pack in total minutes. 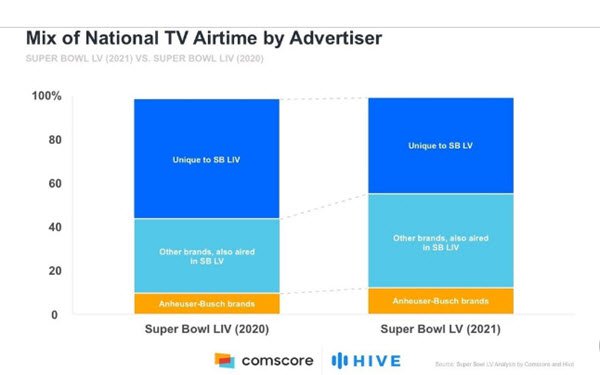 Consumer goods advertisers again dominated share of voice, with 31% of all national ad minutes, although that was down slightly from last year’s 35%.

Tech and telecom brands increased share a bit—up to 18% of total minutes, versus last year’s 15%.

Despite the streaming wars (or perhaps because big streamers spent so much promotional money during 2020), media and entertainment brands were slightly down, at 5% of total minutes versus last year’s 6%.

And despite the pandemic, restaurants were up to 8%, from last year’s 4%, with Chipotle, Jimmy Johns and Uber Eats making appearances. 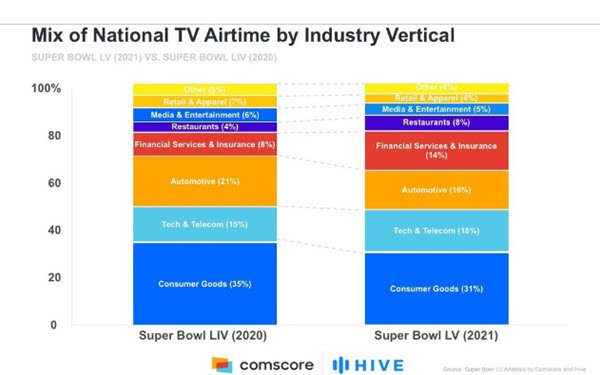