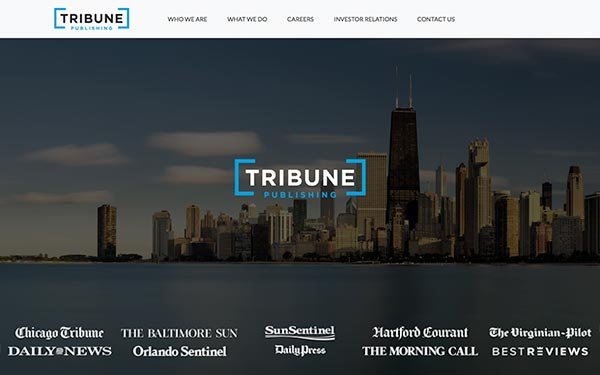 Tribune Publishing, owner of such venerable journalistic brands as the Chicago Tribune and New York Daily News will be acquired by Alden Global Capital for $630 million in an all-cash deal, raising fears of newsroom cuts.

Also included in the transaction are the Hartford Courant, South Florida's Sun Sentinel and Orlando Sentinel, Virginia's Daily Press and The Virginian-Pilot, and Lehigh Valley, Pennsylvania’s The Morning Call.

The deal, which was announced Tuesday evening after the close of the stock market, is expected to close in the second quarter of 2021, subject to such conditions as the expiration of waiting periods under the Hart-Scott-Rodino Antitrust Improvements Act of 1976 and the approval of holders of the Tribune common stock not owned by Alden.

The Baltimore Sun, which is also owned by Tribune Publishing, is being sold in a non-binding agreement to Sunlight for All Institute, a public charity formed by Stewart Bainum Jr. concurrent with the signing of the merger agreement.

The titles have faced the same daunting challenges as other newspapers in adapting to the digital age.

But observers wonder about Alden’s commitment to high-quality content.

A journalistic report on the purchase in the Chicago Tribune Tuesday night describes Alden as “a hedge fund with a history of deep cost-cutting at its other newspaper properties.”

The report continues: “The hedge fund has come under fire for sweeping layoffs at its newspapers. The flashpoint was the March 2018 news that the Denver Post, which Alden has controlled since 2010, was going to lay off 30 employees in a newsroom that had already shrunk from 250 to less than 100 staffers.”

“Despite earning higher profits than is typical in the industry, the NewsGuild says that between 2012 and 2019, Alden cut 71% of jobs in the hedge fund’s Guild-represented newsrooms,” reports the Columbia Journalism Review.

The deal with Alden must also be approved by Patrick Soon-Shiong, who owns roughly 24% of Tribune Publishing. Soon-Shiong acquired the Los Angeles Times and San Diego Union-Tribune for $500 million in 2018, per the Chicago Tribune report.

Two years ago, Alden failed in its hostile takeover of Gannett, the U.S.' biggest newspaper publisher by circulation.