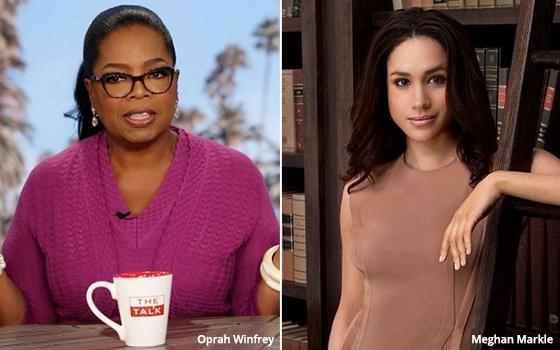 Oprah Winfrey’s upcoming prime-time interview special with the Duke and Duchess of Sussex (aka Harry and Meghan) has a throwback feel.

Such Big Events (with a capital “B” and “E”) are rarer today on TV than they used to be for reasons that are more or less obvious. Basically, to put it crudely, TV ain’t what it used to be.

A generation ago, a high-profile, sit-down interview with a major newsmaker or, in this case, a news-making couple was once the province of any one of a number of top network news stars, plus Oprah, who competed fiercely for these exclusives.

Today, the top stars of TV news do not have nearly the same influence and heft as the generation of personalities who preceded them. Of that once-powerful and highly paid group, Oprah is really the last one standing.

The 1990s and early ’00s may have been the heyday of these splashy, headline-making presentations. The stars who fought for them included Katie Couric, Connie Chung, Diane Sawyer and Barbara Walters -- with the latter two, both employed by ABC News, battling especially hard against each other.

Walters was often the champion of these battles for the big “gets” (as they came to be called in the parlance of network news). But Oprah, who was not a newsperson per se, got some of them too. And on occasion, so did Larry King for his nightly CNN show.

The targets of these efforts included the notorious newsmakers of the day, including Bill and Hillary Clinton, Monica Lewinsky, O.J. Simpson, Michael Jackson and a host of others.

One offbeat example was Newt Gingrich’s mother, who Chung coaxed into revealing that her son thought Hillary was a [insert b-word that rhymes with “itch”]. It was one of the great moments of ’90s TV.

More recently, these kinds of interview spectacles have been few and far between. Just about the only one I can recall from relatively recent past history was Sawyer’s high-rated prime-time interview in spring 2015 with Bruce Jenner, who was then transitioning into Caitlyn.

Now, six years later, Oprah will be seen on CBS on a Sunday night -- March 7 -- in a 90-minute special interviewing Meghan and Harry. CBS announced this interview coup on February 15.

Interestingly, this special does not spring from the auspices of CBS News. Oprah’s company, Harpo Productions, is named as the show’s producer, and the show was announced by Harpo and publicists from the entertainment side of CBS.

This does not mean we should expect to see Oprah suddenly leap from her chair and do a song-and-dance number with the duke and duchess. In all likelihood, this special will look and sound like a news-division production, but hopefully not as dull as one.

If one can imagine the great universe of television as a traditional English manor, then Oprah Winfrey might be considered its grand duchess (or possibly its dowager countess).

Perhaps this is why her interview special with the Duke and Duchess of Sussex is framed so familiarly in the title that CBS has grandly bestowed upon it -- “Oprah With Meghan and Harry: A CBS Primetime Special.”

The news release that CBS sent out about this special was three paragraphs in length. The way it was written made it seem as if Meghan -- formerly known as Meghan Markle, recurring cast member on the USA Network lawyer series “Suits” (from which the photo above originates) -- is this show’s primary attraction.

“Winfrey will speak with Meghan, The [sic] Duchess of Sussex, in a wide-ranging interview, covering everything from stepping into life as a Royal [really? “Royal” with a capital “R”?], marriage, motherhood [and] philanthropic work to how she is handling life under intense public pressure.”

Not until these crucial issues get a comprehensive going-over one-on-one between these two gals -- er, I mean “duchesses” -- will the former Prince Harry join the fray.

“Later,” continues this news missive, “the [Oprah and Meghan] are joined by Prince Harry as they speak about their move to the United States and their future hopes and dreams for their expanding family.”

Hopefully, after we get the motherhood and philanthropy questions out of the way, Oprah will not shy away from asking the kinds of questions most people will be tuning in to hear.

Examples of these might include: What’s all this about you (Meghan) not getting on with your sister-in-law Catherine, Duchess of Cambridge, who everybody loves more than you? And how do you feel when you are characterized as the “Yoko Ono of the British Royal Family” who is responsible for driving wedges between various family members such as your husband and his older brother?

Whether or not Oprah gets to these crucial questions and issues will not really matter. Regardless, this special figures to be one of the ratings highlights of the current TV season, and a rare example of what old-fashioned network television can still do better than anyone.