'The Dodo' Partners With Calm To Help Kids Sleep 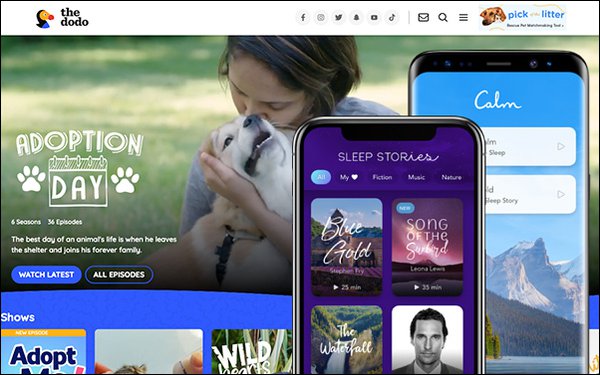 The animal-focused site Dodo has teamed with the Calm brand, which produces apps for sleep and meditation. Together, they will create new sleep stories that highlight the Dodo Kids characters.

“Whether it’s during the day or at bedtime, all of us are moved and comforted by animals and their stories,” said Dave Glauber, creative lead for Dodo Kids.

The two new stories featured on Calm: “Arnie’s Nighttime Bath” and “Frankie and Maggie’s Nighttime Hike.” Arnie the armadillo looks for ways to make his dream come true, while Frankie the goat and Maggie the dog share an adventure under the stars.

Stories are available in Spanish, too.

To extend the new venture, The Dodo will distribute two daytime videos, prequels to the sleep stories for its Dodo Kids YouTube Channel, available on the Dodo Kids app.

The Dodo, founded in 2014, has been adept at brand extensions.

In November 2020, The Dodo’s third annual Best Dog Day Ever festival, the “At Home Edition,” was sponsored by carpet-cleaning company Resolve. That kicked off the launch of a new Group Nine advertiser opportunity called Box'd. The D2C box delivery sends products from a sponsor mixed with editorially curated products to customers’ homes.

Almost two years ago, The Dodo partnered with Instagram for an IGTV series for teens, “You Know Me … Now Meet My Pet.” The brand also published three books with Scholastic, based on the video show.