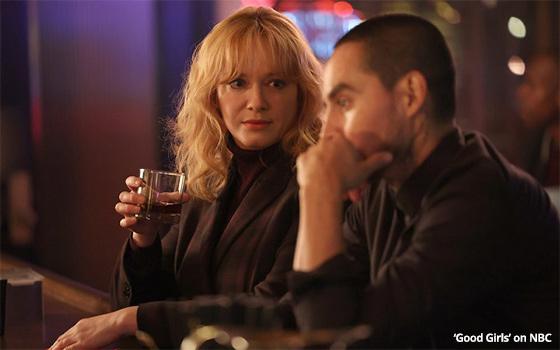 While watching this coming weekend’s fourth-season premiere of NBC’s “Good Girls” I was surprised about what I have evidently been missing since I watched the series premiere back in 2018 and then never returned.

Back then, I was turned off by what I interpreted as the show’s central theme -- that for the show’s three female characters, the best and only solution available to them for relieving their financial stress was to resort to armed robbery.

If memory serves, the real world was then experiencing one of those periods in which a group of senseless shootings had been in the news recently.

So I decried the resort to violence in this TV show in which three women seeking empowerment felt that they had to threaten others with violence in order to achieve this goal.

And then the show stuck around through three seasons -- and is now about to start a fourth season on Sunday night.

Congratulations to all involved in their efforts to bring the “Good Girls” story to this point. If watching the season-four premiere demonstrated anything, it is that this show is a gem whose high quality is unusual for network television.

For those not yet familiar with “Good Girls,” it can be summed up this way: It is a female “Breaking Bad.”

Apparently, in the seasons ignored by yours truly, the women of “Good Girls” -- led by Christina Hendricks (pictured above) -- took up counterfeiting, in partnership with local hoods.

While this differs from schoolteacher Walter White embarking on a side career as a methamphetamine manufacturer and kingpin in “Breaking Bad,” the circumstances are similar.

In “Good Girls,” these middle-class women need money, and they turn to crime -- which is what Walter White did too (plus, he had been told he had terminal cancer).

Like White, the women of “Good Girls” (co-starring Mae Whitman and Retta) are juggling the stresses and pressures of their real lives, while also keeping their criminal activities a secret.

As in “Breaking Bad,” the goal of keeping things quiet is not so easy when one is consorting increasingly with criminal types who have a propensity for upping the ante, making threats and otherwise making a challenging situation even more difficult.

The lesson in “Breaking Bad” is the same one here – i.e., criminal careers are apparently progressive.

In other words, once one has embarked on a criminal career, it is darn near impossible to stop and, more often than not, the criminality grows and expands rather than the other way around.

At least this is what one can conclude from “Breaking Bad” and now “Good Girls.” As the show starts its fourth season, the not-so-good women of the title seem to be on the verge of undertaking a drastic measure to “manage” their business partners.

Maybe “Good Girls” is on the verge of something too. Three years after it was first introduced, it seems poised to take its place as one of the best shows currently on television.