Fresh New Lawyer Drama Takes Up Residence On OWN 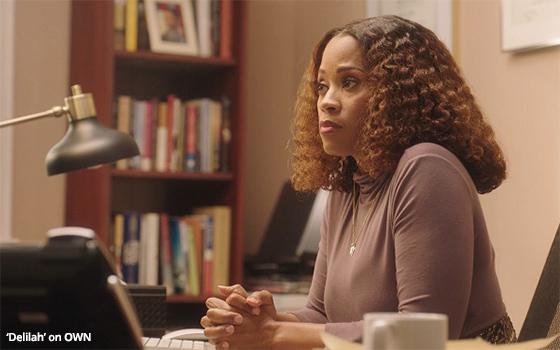 OWN would appear to have another hit on its hands with the new drama “Delilah” premiering this week on Tuesday.

That’s the title character in the photo above, played by Maahra Hill. She’s Delilah Connolly, a lawyer in what looks like Charlotte, North Carolina.

In the series premiere, which the TV Blog previewed last week, busy Delilah complains about her current caseload but cannot resist taking on another client anyway.

This one is a long-time acquaintance (and not-so-close friend) who ran into some kind of serious trouble while employed at a local defense contractor.

Before the first hour is over, Delilah seems to have stumbled on a conspiracy that suddenly turns deadly. And that’s when the first episode suddenly ends, leaving anyone who watches it wanting to see more.

“Delilah” is essentially OWN’s replacement for its last successful drama, “Greenleaf,” which ended its run earlier this year. “Greenleaf” happened to be one of the best dramas on television, and “Delilah” comes from the same executive producer, Craig Wright.

Charles Randolph-Wright is also an executive producer of “Delilah,” along with Oprah Winfrey, who, by the time anyone reads this TV Blog, will have already been seen interviewing the Duke and Duchess of Sussex (aka Harry and Meghan) Sunday night on CBS. So this is a big week for her.

Although some might read some of the descriptive material above and form the impression that “Delilah” sounds like just another lawyer show, that is not the case.

The show has a freshness that is rare for prime-time dramas of this type. Its setting in Charlotte sets it apart from the usual cities where most legal dramas customarily set up shop -- New York, Los Angeles, Chicago, and sometimes Boston.

In addition, “Delilah” is no law firm soap opera. In this show, the titular lawyer is an independent who is not a part of a showy downtown firm (although the press material hints that she used to be).

Delilah is her own boss. She works with one staffer, an assistant, in a cozy office suite that looks like it was carved out of the first floor of an old house.

Many cities and towns have these kinds of professional offices in renovated houses, but “Delilah” might be the first one on TV (at least in recent memory) to be set in one.

Like other professional women characters on TV (and many in the real world), Delilah works hard to achieve a work-home balance. We don’t learn her entire backstory in the first episode (which is another great thing about this show), but it is evident she is not currently married.

Nonetheless, she is managing a household with three children -- at least one of whom is not her own.

The TV Blog is generally adept at finding fault with just about every new TV show that comes its way. This dubious talent comes with the territory when one takes up the writing of criticism for a living.

But every once in a while, a show comes along that stymies even the most skilled fault-finder. OWN’s new “Delilah” is such a show.