Checking In On 'Jeopardy!': Where's The New Host Already? 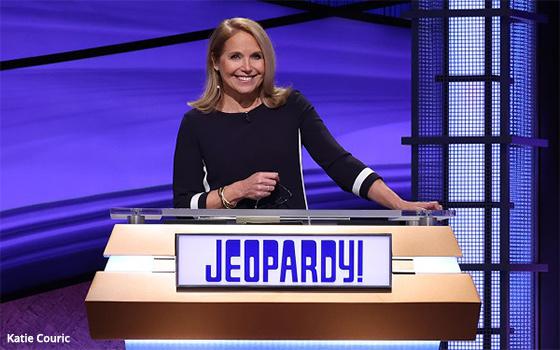 Here is where we stand now, some two-and-a-half months into 2021, on the uncertainty of “Jeopardy!” and who will eventually be named as the full-time host of one of our most popular and essential TV shows.

The Alex Trebek episodes that were taped before he died last November ran their course on January 8. The following Monday, January 11, “Jeopardy!” champion Ken Jennings took over as host and then was seen for six weeks.

He then disappeared and was replaced for two weeks by the executive producer of “Jeopardy!,” Mike Richards. Jennings has been seen elsewhere, however -- on “The Chase,” the weekly ABC prime-time quiz show that premiered on January 7.

This past Monday on “Jeopardy!,” Katie Couric (pictured above) turned up to host the show. She was previously announced as an upcoming guest host, along with NFL’er Aaron Rodgers, sitcom actress Mayim Bialik, CBS newsman Bill Whitaker, Dr. Oz, Anderson Cooper, Savannah Guthrie and Sanjay Gupta.

Their exact dates to appear have not yet been announced, but if they each do at least a week, then that will encompass eight more weeks without a permanent replacement for Trebek.

None of these temps are supposed to be serious candidates for the job going forward. Their guest-host stints are positioned as opportunities for the show to make donations to the celebrity hosts’ favorite causes or charities.

Of all of them, however, Couric emerges as the one who might be most available. And she has been doing great this week as the show’s host.

She is an upbeat presence whose sunny demeanor suggests she is having fun hosting the show. For those watching at home, her enthusiasm is infectious. However, there has been no word that she wants the job. And certainly, she does not “need” it either.

There are signs that the show's production team is still wrestling with how to let go of the evidently fond memories they are holding onto for Trebek, who was the show's star and leading light for more than 36 years.

The shows still conclude with an on-air tribute to Trebek tastefully rendered in white lettering on a black screen.

And his name comes up for mentioning from time to time. Couric did it at least once this week in the context of a statement in which she speculated that Trebek would have enjoyed the closeness of the game she was then leading.

Most notably, Ken Jennings ended all of his shows with the usual thank-yous to viewers and contestants, but then routinely added, “Thank you, Alex.” After a while, thanking Trebek in this way began to come across as maudlin.

In the same spirit and manner in which Couric referred to Trebek and speculated on how he would have reacted to the game she was leading that day, the TV Blog wonders if Trebek himself would disapprove of his show’s long mourning period and say (in a friendly way), “Enough already.”

In that same vein, he might say the same thing in reference to the apparently drawn-out process of hiring his replacement. I never knew the man, but I imagine him saying something like, “Enough already. Give the job to Ken Jennings, and he no longer has to thank me.”

For the record, the TV Blog wholeheartedly agrees. Naming Ken Jennings for the host position is a no-brainer. As he proved in January and February, he is more than qualified to do the job.

Unless he doesn’t want the job for some reason, then the job ought to be his. And if he doesn’t want it, then it is a rare instance in the life of Ken Jennings when he didn’t do the smart thing.

1 comment about "Checking In On 'Jeopardy!': Where's The New Host Already?".
Check to receive email when comments are posted.
Next story loading