Fascinating History Of Reality TV Deserves Better Than This 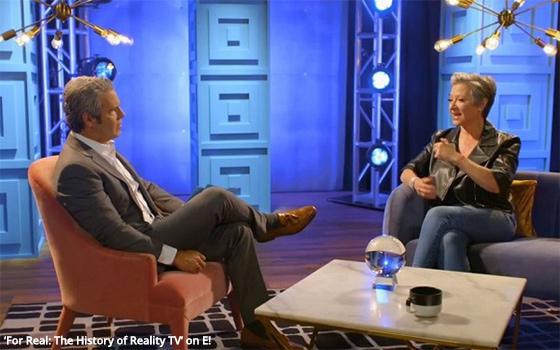 Various limitations and obstacles seem to have bedeviled the production of an eight-episode docuseries whose ambitious aim is to tell the story of reality television.

This goal is laid bare in the show’s title -- “For Real: The Story of Reality TV.” The first hour premieres this coming Thursday on E! The series is hosted by Andy Cohen, who is also credited as executive producer.

Cohen and his team wrangled a number of interviews with former participants from a number of reality-TV shows -- some of which can rightly be considered landmarks in the history of this form of television show, and some not, although this is a matter of opinion.

Aficionados of reality TV or long-time journalists such as yours truly who have chronicled the evolution of this peculiar form of TV content since it first appeared may tend to focus on what’s missing from this “Story of Reality TV” more than what it contains.

For example, in this week’s premiere episode, the reality shows that get covered include “The Osbournes,” “The Simple Life,” “The Girls Next Door” (and its spinoff “Kendra On Top”), “Breaking Bonaduce,” “The Anna Nicole Smith Show” and “Keeping Up With the Kardashians.”

Of these, only “The Osbournes” can be considered ground-breaking. “The Simple Life,” starring Paris Hilton and Nicole Richie, was not exactly a landmark in reality television, but it was oddly memorable.

As for the rest, the Playboy bunny shows (“Girls Next Door” and “Kendra On Top”) are rarely talked about today -- except in this docuseries. The same can be said for “Breaking Bonaduce” and “The Anna Nicole Smith Show,” both of which are treated like landmarks here.

The Anna Nicole show in particular was no landmark. On the contrary, it was one of the most odious TV shows ever produced, mainly because of the way it exploited its titular star. Nevertheless, in “For Real,” the show is celebrated.

The premiere episode of “For Real” concludes with Cohen “interviewing” the Kardashian women at one of their houses, but Cohen gushes over them more than interviewing them.

The whole segment plays like a long promotion spot for the final season of “Keeping Up With the Kardashians” that just started on E!, which is the very channel on which Cohen’s reality docuseries is airing. Go figure.

A list of interviews in upcoming episodes of “For Real,” according to a press release, does read like a Who’s Who of reality TV stars.

Among the most tantalizing are Richard Hatch, winner of the first “Survivor,” and Ruben Studdard and Clay Aiken, winner and runner-up (respectively) of the second season of “American Idol.” “Survivor” and “American Idol” were also reality-TV landmarks in every sense of the word.

Other interview subjects include Bret Michaels, Janice Dickinson, Dr. Drew Pinsky, Mama June (mother of Honey Boo Boo), Thom Filicia (from the original “Queer Eye for the Straight Guy”), Omarosa and a gaggle of “Real Housewives.” (Cohen interviews one of the “Real Housewives of New Jersey,” Caroline Manzo, in the photo above.)

As interesting as at least some of these interviews may turn out to be, this series seems like an abridged, subjective history on a topic that deserves comprehensive, objective treatment.

It is possible that the series was constrained by, and limited to, the interviews it could get (vs. the ones it could not) and, possibly, the footage it could get permission to use.

For example, a number of landmarks in the evolution of reality TV seem as if they are to be passed over here, including at least three titles that caused a sensation when they originally aired (all on Fox) -- the one-off special “Who Wants to Marry a Multimillionaire”? and the subsequent “relationship” series “Joe Millionaire” and the original “Temptation Island.”

And those three shows are only the tip of the iceberg. The truth is, it would take someone on par with Ken Burns to do justice to the topic of reality TV in a documentary series. But Andy Cohen is no Ken Burns and NBCU is not PBS.

Moreover, it is doubtful that Ken Burns will turn his attention to “The Real World,” “Survivor,” “The Osbournes” or any of their progeny any time soon.

television
3 comments about "Fascinating History Of Reality TV Deserves Better Than This".
Check to receive email when comments are posted.
Read more comments >
Next story loading