The Miller Lite Candle: Rekindling Memories Of Times You Were Lit 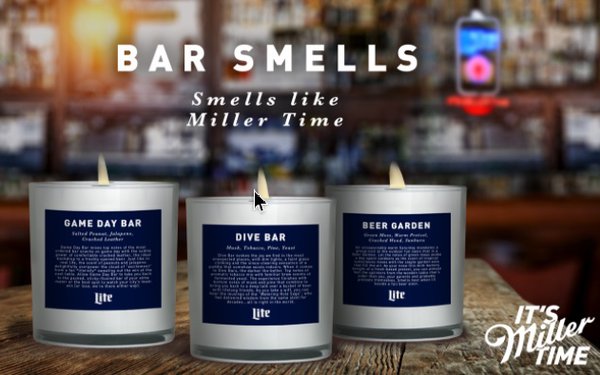 Some people say, “Ah, the smell of a bar! Who can forget it?

And others say, “OHHH, the smell of a bar! Who can forget it?

For either group, Miller Lite has some candles to sell you, though it might be a gag gift, more so for one group than the other.

For a limited time, the Molson Coors brand is marketing three new candles scented to evoke, in the best possible way, the distinct, um, fragrance of some watering holes -- and the good-time experiences you’ve had there in the non-pandemic past.

Game Day ismade with the scent of salted peanut, jalapeno and cracked leather. “It creates top notes of the most ordered bar snacks on game day resulting in the ideal backdrop to a freshly opened beer,” according to Carol Krienik, associate marketing manager for Miller Lite.

Beer Garden features green moss, warm pretzel, cracked wood and sunscreen  to “evoke a day spent outdoors as the scent of tropical sunscreens mixes with the staple garden eats that fill the air.”

And Dive Bar, possible the most ambitious,mixes scents of musk, tobacco, pine and yeast to “conjure dim lights, a faint glass clinking and the sinus-clearing sensation of a puddle that somehow exists indoors.”

The candles are made by Penn & Beech Candle Co. which operates a funky make-your-own candle/beer and wine counter and wholesale business in downtown Indianapolis.

All the proceeds from the $20 candles go to the United States Bartenders’ Guild, a nonprofit organization that supports bartenders and other service industry professionals, as well as the Canadian hospitality industry.

Barkeeps also probably know the smells best, too -- especially when they lock up or open the tavern every day. Ummmmm!

Miller Lite, of course, dotes on the happy tavern memories you may have. “We wanted to create scents that would make you feel like you’re back at the bar with friends and a cold beer in hand,” said a spokeswoman. “We worked to make the scents as authentic to those moments as possible, while still creating something that would smell appealing in your home.”