You Can Call Me 'Al': CBS Welcomes Immigrant Sitcom 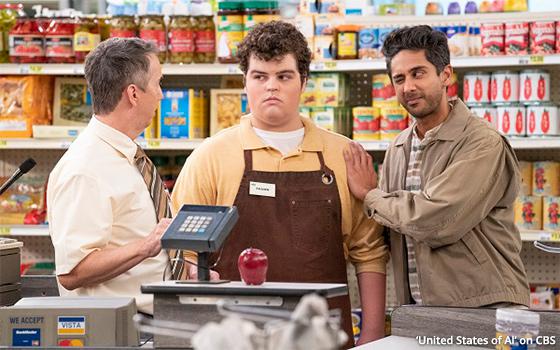 Sitcom producer Chuck Lorre and his team have come up with their second immigration comedy in two years for CBS.

The first one was “Bob ♥ Abishola,” the story of an American businessman who falls in love with an immigrant from Nigeria who is a nurse. “Bob ♥ Abishola” is now in its second season.

The new one, called “United States of Al,” concerns itself with an English-speaking immigrant from Afghanistan. He is a young man named Al (played by Adhir Kalyan, above photo right) who had been attached to a unit of United States Marines serving as an interpreter in the war-torn country.

In the premiere episode of “United States of Al,” we see the titular immigrant arriving at the airport (it is supposed to be in Columbus, Ohio) where he is greeted by his friend Riley (Parker Young).

Riley is a Marine who befriended Al when they served together, and he is also the one who applied for and won Al's admission into the United States.

Judging by the first two episodes of “United States of Al” that the TV Blog previewed on Monday, the show will have Al becoming accustomed to his new surroundings while Riley and his family -- grown sister, small daughter and live-in dad (played by Dean Norris of “Breaking Bad”) -- get used to Al.

The show is very well-meaning, and so is Al -- but therein lies its most conspicuous flaw. Perhaps because of his status as a newcomer in a strange place that is far different from the country he has just come from, Al is a people-pleaser whose sunny disposition is supposed to be charming.

But instead, it is grating. While watching the show, I wondered how soon this family will turn from welcoming him in their home to wishing he would leave.

He is a noisy, meddling presence. When he learns that his friend Riley's marriage is on the rocks, Al arranges a peace conference with his estranged wife, against Riley's wishes.

He drives a car without a driver's license, haggles over the price of a chicken in a supermarket and declares American apples to be tasteless.

He knows little or nothing about life in the United States (which is understandable), but he acts like a know-it-all when it comes to other people's lives and life in general.

He is obviously trying hard to be liked, but the effort has the opposite effect. The same can be said for the show too.

Every line and gesture is met with gales of laughter -- most if not all of which is likely pre-recorded -- as if this show is just about the funniest thing on television since Milton Berle put on a dress.

This show and its main character want so desperately to be liked that they both oversell themselves.

They do not have to, however. TV has more than enough room for two immigration comedies, and maybe more.

As “Bob ♥ Abishola” is already demonstrating on Monday nights, prime-time immigration sitcoms are a great way for TV to celebrate the greatness of America -- a nation that has many problems, but nevertheless is still a place where great masses of people from around the world would like to live.