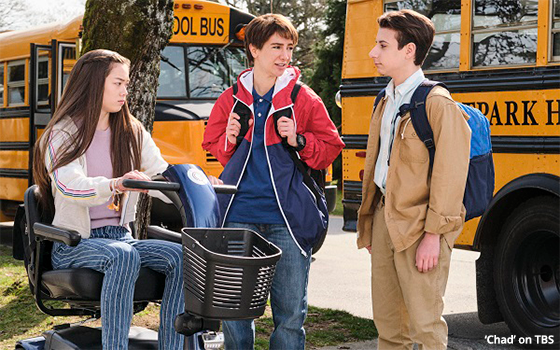 A 39-year-old woman plays a 14-year-old boy in a new sitcom whose premise is one of the most unusual that has ever been conceived for a TV comedy.

And that’s saying a lot, since the history of sitcoms is riddled with bizarre ideas, some successful, some not -- families of ghouls (“The Munsters”), a nagging automobile (“My Mother the Car”), a talking orangutan (“Mr. Smith”), a furry alien puppet (“ALF”), a flying nun and so many more.

And now we have “Chad” (premiering next week on TBS) about a boy played by a woman (Nasim Pedrad, above photo, center) whose costume (including, presumably, hair and makeup) makes her look less like a boy than a girl masquerading as a boy.

While watching the show (which the TV Blog previewed this week), I could not stop staring at this character in a conscious effort to convince myself that Chad was a real boy. But eventually I had to concede that my efforts were not working, and I remained unconvinced.

This scenario is so distracting that it presents an insurmountable obstacle to accepting this show’s premise, much less enjoying it.

And where the latter issue -- enjoyment -- is concerned, there are plenty of obstacles standing in the way of that.

I saw a headline on a story or a review online about this show the other day that described it as “cringe-worthy.” But I am unsure whether the writer of that assessment was applying this phrase in a complimentary way, as if the show’s cringe-worthiness is a reason to watch it.

I agree with the phrase, but not as a compliment. This is a show that does make you cringe -- so often, in fact, that “cringe-worthy” is not an accurate enough description to pin on it. “Unwatchable” is a word that comes more accurately to mind. So does “creepy.”

The character is just too odd to take. In the show, the boy Chad is a Persian-American (or Iranian-American) who is about to enter his first year in high school (otherwise known as ninth grade).

He is an awkward young teen who is obsessed with fitting into his new surroundings. Every desperate action or gesture he undertakes to ingratiate himself with others in this new school is an epic failure.

But your heart never aches for him. For one thing, he is not likable or capable in any way of attracting our sympathy. For another, he is such an unbelievable character -- more cartoon than real person -- that it is impossible to care about him.

In addition, I feel obligated to point out that the show’s premise of the awkward teen who is hellbent on fitting in when he or she enters high school has been done to death on TV. “Chad” adds nothing to that subject either.

In the final analysis, when the new shows of 2021 are tallied up and assessed, “Chad” will likely be remembered (if it is remembered at all) as an oddball that just didn’t fit in, no matter how hard it tried.