Man With A Horn: Doc Severinsen on 'American Masters' 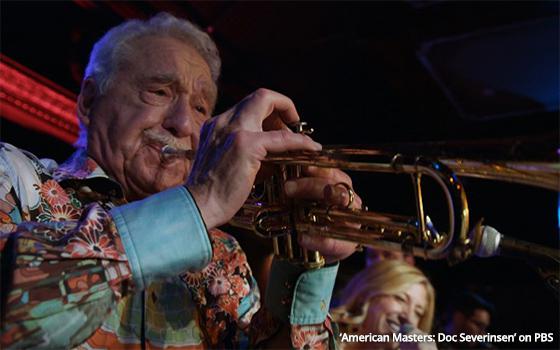 A new “American Masters” documentary about Doc Severinsen serves as a reminder that the kind of TV many of us knew for most of our lives is ancient history in the eyes of many others.

Not for the first time while watching a documentary about television have I been struck by the filmmaker’s evident need to include explanations of aspects of TV history that those of us of a certain age take for granted.

In this new “American Masters,” for example -- subtitled “Never Too Late: The Doc Severinsen Story” and premiering Friday night on PBS -- one of the interview subjects is current “Tonight Show” bandleader Questlove.

He gets the task of explaining that back in Doc Severinsen’s day in the Johnny Carson era of “The Tonight Show,” there were only three TV networks and “The Tonight Show” was watched by tens of millions because it was the only late-night show that mattered.

But doesn’t everybody already know this? I guess not. I watch documentaries such as this and find it hard to get my head around the fact that millions of younger Americans today have no idea what television was like in the years before the arrival of the multiplatform universe that they are accustomed to today.

At such times, I also think: Too bad for them. They missed out on an era when huge audiences for “The Tonight Show” and so many other forms of television were de rigueur, and watching TV was a much more shared experience than the way it is now, with thousands of TV shows all balkanized into tiny niches.

I also wonder if the old network television era holds any fascination for the current generation. If it does, even they might enjoy this “American Masters” installment, which devotes a significant chunk of its 90-minute running time to the old Carson “Tonight Show.”

This is certainly appropriate because Severinsen’s time on “The Tonight Show” is the centerpiece of his life and career, and is the very reason why he rates inclusion in the “American Masters” pantheon.

It is what made him famous. On “The Tonight Show,” he was part of one of the most recognizable triumvirates in America -- led by Carson, and then followed by Severinsen and Carson sidekick Ed McMahon.

In addition to “The Tonight Show” (and subordinate to it) are two other aspects of Severinsen’s life that qualified him for this “American Masters” biography -- his musicianship and his longevity.

Time and time again, the point is made in the documentary that beneath the lighthearted hijinks and the outlandish, flamboyant outfits for which he became famous on “The Tonight Show,” Severinsen was a trumpet virtuoso who is considered by other musicians and horn players to be one of the greatest trumpeters who ever lived.

This is amply demonstrated throughout the film as Severinsen is seen in performance clips from throughout his life, including a number of them preceding “The Tonight Show.” In fact, he was somewhat of a trumpet prodigy, having won contests for his playing even as a boy growing up in Oregon.

Perhaps the single most surprising thing I learned when I previewed this show the other day is that Severinsen is still doing it at the age of 93. To put it mildly, he is a very active senior.

Among other things, he still possesses the endurance to tour and perform, and the strength necessary to play the trumpet at a very high level. His mind seems as sharp as ever.

For those of us old enough to remember when Carson, McMahon and Doc Severinsen ruled late-night TV, it is a heartening experience to see Severinsen still doing what he does best some 30 years after the end of the Carson era.

Doc outlived them all and by the looks of it, he just might outlive the rest of us too.