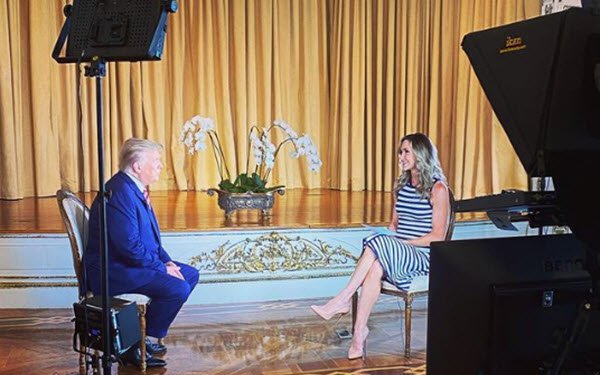 Facebook’s ban of Donald Trump is still in effect pending a decision by the company’s Oversight Board, and that ban includes accounts or pages associated with the Trump campaign and those of former surrogates for the campaign, notes TechCrunch, which first reported on the episode. Laura Trump’s accounts fall into both categories.

Facebook’s warning noted that, “in line with the block [it] placed on Donald Trump’s Facebook and Instagram accounts, further content posted in the voice of Donald Trump will be removed and result in additional limitations on the accounts.”

Facebook confirmed that screenshots depicting emails from the company (shown above) were legitimate. 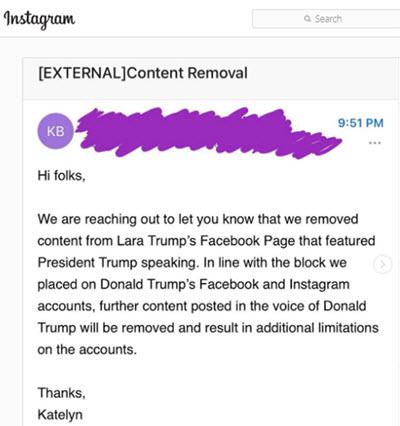 Facebook still make a "news" exemption for Trump, "presumably for something more akin to a ‘60 Minutes’ interview -- but in this case, he was being interviewed by someone involved in his campaign who then planned to promote the video on a campaign-associated account,” TechCrunch elaborates.

Following the warning, Laura Trump instead posted the interview video on other venues popular with Trump supporters, including video sharing site Rumble and “The Right View,” a syndicated talk show.

During Trump’s unsuccessful reelection campaign, Laura Trump hosted “The Right View,” as well as other of digital campaign content. Prior to marrying Trump’s son Eric in 2014, she was a producer for “Inside Edition.”

She was a frequent guest on Fox News during the campaign, and earlier this week, Fox News hired her as a contributor. She has acknowledged that she is mulling a run for U.S. senator in her home state, North Carolina.