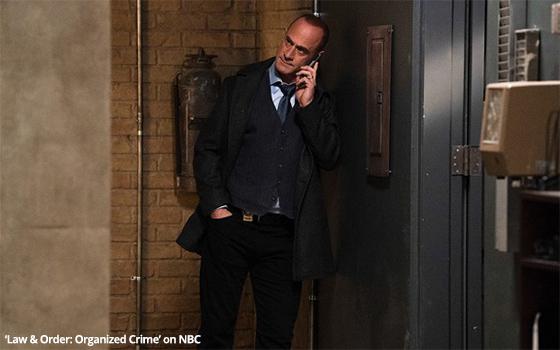 We don’t hear much about organized crime in the way that we used to a couple of decades ago.

Back in the 1980s and ’90s, organized crime stories were a New York news staple. Local news outlets such as TV stations and tabloid newspapers had full-time staff members who covered the Mafia like it was the Mets or Yankees.

But in the last 20-plus years or so, that kind of action seems to have subsided. And yet, here comes another incarnation of “Law & Order” focused on organized crime that just last week took up residence in the 10-11 p.m. time period Thursdays on NBC.

The new “Law & Order: Organized Crime” (which will likely get shortened at some point to “L&O: OC”) is the seventh “Law & Order” series. There is even reportedly an eighth one in development: “Law & Order: Hate Crimes” (“L&O: HC”).

The star of the new “Law & Order: Organized Crime” is Christopher Meloni, who returns to the “L&O” fold as Detective Elliot Stabler, the role he played on “Law & Order: Special Victims Unit” from 1999 to 2011.

This time, he is assigned to an organized-crime task force whose case this week concerns an organized, criminal operation by which trucks carrying COVID-19 vaccines headed to neighborhoods that need them the most are hijacked, and the vaccines are then sold to Park Avenue doctors who administer them to their well-heeled clientele at huge markups.

There is even a scene in this week’s episode (which the TV Blog previewed in advance of its airdate) in which the vaccines are administered by roving medical technicians at a posh cocktail party -- like hors d'oeuvre servers at an upfront party.

I have not heard of these kinds of illegal events occurring in the real world. As a matter of fact, where New York City is concerned, vaccines and the appointments to receive them are particularly plentiful these days, which means that criminal efforts to put on private vaccine parties are unnecessary.

Whether it is fictional or not, the black-market vaccine storyline in the new “L&O: OC” sets up a showdown between Stabler and a crime kingpin named Wheatley (played by Dylan McDermott) who engage in a square-shouldered, in-your-face, macho stare-down outside an office building near Grand Central Terminal (identifying the New York City locations in all of the “Law & Order” shows is one of the fun things about watching them).

While the surname Wheatley does not seem to conform with TV and movie traditions where the ethnicity of certain mobsters is concerned, let the record show that this Wheatley is in business with a group of Italian-Americans.

If this seems old-fashioned, then fear not. Mr. Wheatley proposes to modernize La Cosa Nostra with an ambition of becoming the Jeffrey Bezos of the underworld (as his son describes him in a scene in this week’s show).

While aspects of this week’s “L&O: OC” are farfetched, the show is held together principally by Meloni, who is one of the most charismatic actors around. Throughout the show, you never stop rooting for him to deliver a severe form of justice to this smirking kingpin.

Unfortunately, the biggest flaw of this week’s episode of the show is that it ends in a cliffhanger, which is to say, the storyline does not get resolved at all. To be continued …