'Spy City' Earns Its Place Among The Best Spy Thrillers 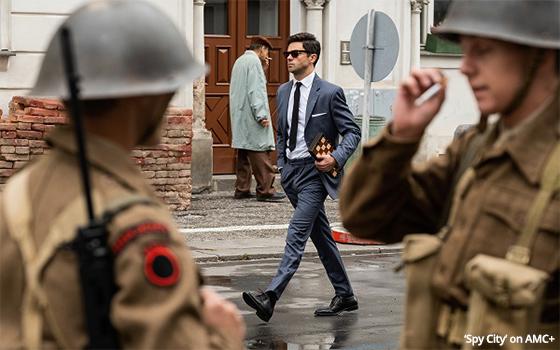 It is a setting for many a spy thriller, for good reason. Still partitioned among the victors of World War II, by the early 1960s Berlin was Ground Zero for the Cold War between the United States and the rest of the west, and the Soviet Union, which controlled Eastern Europe.

Movies and novels too numerous and time-consuming to count have been set in the sometimes lethal spy vs. spy world of the Cold War -- which would seem to make it difficult for a new one to stand out.

And yet, the new, six-part “Spy City” -- which starts streaming with Episode One Thursday on AMC+ -- emerges as a thriller that more than holds its own among the best of them.

The star of the show is Dominic Cooper (pictured above), who was last seen on TV in the title role of “Preacher” on AMC -- a show that also received a thumbs-up review here.

In “Spy City,” he plays a British spy shuttling between the eastern and western sectors of Berlin. He has just been recently reassigned to the city following an incident a year earlier in which he was wrongly accused of a crime.

Now that he’s back in Berlin, he is on to other, newer cases, but still nursing a grudge over the previous incident, and hellbent to find out why the incident happened and who was behind it.

As readers of this TV Blog may know by now, the view from here on these period dramas from long-ago decades such as the 1960s is that their success often hinges on their ability to transport a viewer back in time and make the time and place feel authentic.

The makers of “Spy City” completely succeed at this because of their apparent attention to the small details that matter most and add up to a complete, convincing whole. These include, of course, locations, costumes, décor and props.

The actors in this show also succeed at persuading the rest of us that they are truly acting in the period in which they have been placed.

This is often not the case with TV series set in past decades such as the 1950s, ’60s or ’70s that the current generation of actors and actresses are not old enough to have experienced firsthand.

As a result, many such shows have an air of inauthenticity, as if the actors are merely play-acting in vintage clothing.

Alas, one of the pitfalls of writing about new TV shows for a living is that there is really only time on any given day to watch one episode of a show like “Spy City.”

If not for the task of writing this review, I would have watched all six.