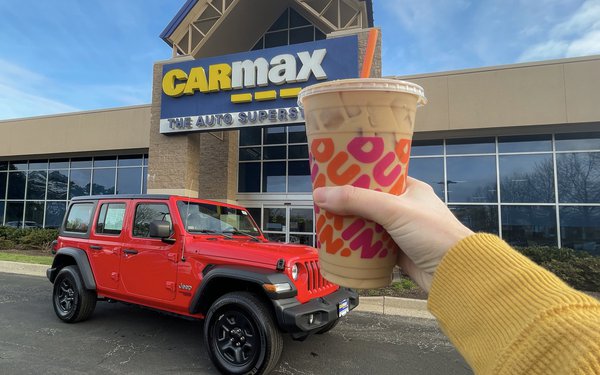 Think how well a car handles a drive-through window is important? So does Dunkin’, and the coffee-and-donuts chain is teaming up with CarMax to help customers test their potential rides.

In the promotion, set to run through May 19, Dunkin’ is handing out $10 gift cards to anyone using CarMax’s 24-Hour Test Drive. The Richmond, Virginia-based CarMax says the “Doin’ Donuts” promotion aims to make the testing experience a little perkier and sweeter. And it gives would-be car-buyers the chance to evaluate the car’s finer points, like whether they like the cup-holders or how their dog handles a drive-through in the new ride.

“At CarMax, we believe the car-buying experience should be as enjoyable as possible while ensuring customers feel confident with their decision,” says Sarah Lane, vice president, marketing at CarMax in its release. “We want customers to experience a day in their life with their new ride, and since America Runs on Dunkin’, we know that includes a trip through the Dunkin’ drive-through for their favorite order.”

Dunkin’ is also caffeinating the joint promo with a contest. Those who share about it on Twitter or Instagram by tagging @CarMax, #DoinDonuts and #24HrTestDrive have the chance to win free donuts for a year.

Dunkin’, which was acquired by Inspire Brands back in December in a $11.3 billion deal, is settling into the new ownership. It just announced an expansion plan in Texas. The new store development agreements are with new franchisee Priceless Coffee and existing franchisee Gratitude Restaurant Group. Each intends to open ten new Dunkin’s in the Dallas area, and four multibrand locations that include a Baskin-Robbins. It also announced six new stores in the Houston area.