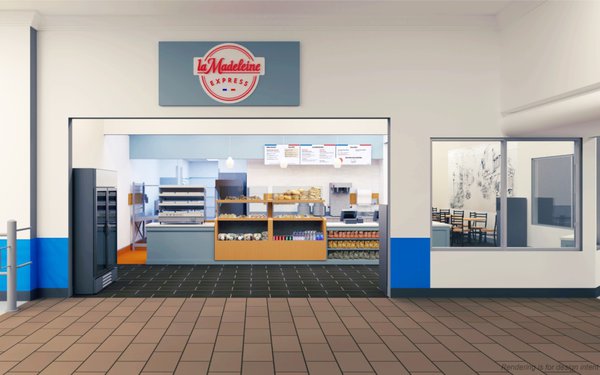 Walmart is teaming up with la Madeleine French Bakery & Cafe, testing a small prototype in 10 locations in the Dallas/Fort Worth area.

The announcement comes just weeks after McDonald’s revealed that it would shutter up to 325 restaurants this year, most of them in Walmart locations. Subway is also shutting down some of its Walmart stores, with Walmart responding that it’s considering more new restaurant partners.

The shake-up inside Walmart mimics shifts in mall food courts around the country. COVID-19 has meant fewer shoppers in stores. And when people are hungry while they’re on the go, drive-through meals are safer than in-store dining.

While evocative pastries might not seem like the likeliest fit with Walmart, the test with Dallas-based la Madeleine is intriguing.

“We look forward to making it even more convenient for the DFW community to enjoy the la Madeleine experience while also introducing our French comfort food to Walmart shoppers that are looking for more diverse dining choices,” says la Madeleine CEO Lionel Ladouceur, in its announcement.

The pilot uses a café prototype significantly smaller than its usual-sized store, which typically ranges from 980 to 2,209 square feet. It will offer grab-and-go choices, as well as dine-in seating, and an assortment of some of its best-selling items, including Chicken Caesar Salad and Tomato Basil Soup, as well as new items, like pizzas, cooked up specifically for the Walmart test.

The Wall Street Journal reports that in the wake of McDonald’s and Subway trimming their Walmart units, the Bentonville, Arkansas-based retailer says it is already testing Yum Brands’ Taco Bell in stores. It's also expanding its partnership with Domino’s Pizza, which already has 30 units in Walmart.

The shifts are likely a small taste of what’s to come as the uneasy relationship between retailers and restaurants continues to unravel amid post-COVID-19 traffic trends. A new report from UBS estimates that more stores are threatened as ecommerce has soared throughout the pandemic. USB calculates that a staggering 80,000 more U.S. stores -- or 9% of the total-- will be closed by the end of 2023.

It also forecasts that ecommerce penetration will reach 27% by 2026, rising from 18% last year.