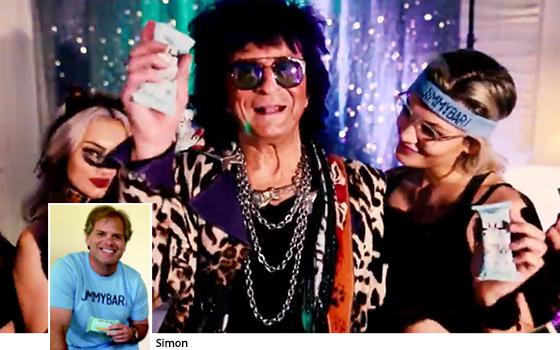 It’s amazing how innovative a nascent brand gets when it doesn’t have the luxury of spending other people’s money. Bootstrapped since 2014, the  JiMMY! Bar line of high-protein, low-sugar “bars with benefits” started with co-founder Jim Simon, his sister Annette and money chipped in by family and friends.

As Jim Simon explained at MediaPost’s recent CPG Brand Insider Summit, the traditional, grocery industrial distribution complex was way too complicated, costly and unprofitable for them. From selling into Google and Facebook’s corporate cafeterias to mastering the “Bob Demo” at “C-Stores” to reviving Survivor’s “Eye of the Tiger” for uproarious video spots, JiMMY! Bars has taken the CPG aisle less traveled to build its brand. Even better, they pay their social influencers in food, not cash. You can listen to the entire podcast at this link.

MediaPost: What hole are you filling? What's the white space in the market that you think has room for this?

Jim Simon: Bars have always been associated for workouts. I started realizing that people need to be told when to eat it. It's kind of funny, but they do, and so we make “bars with benefits.” Let's tell the people when they should eat it: a three o'clock bar, a five o'clock bar and so on. You're starting to see functional food in the form of gummies, bars, etc. We needed to tell people when and why to eat it, along with telling people it just tastes really good.

Also, you eat with your eyes. Our bars look nice. They're drizzled, and they’re pretty.

MP: But you have deployed an alternative distribution strategy to the usual grocery stores. Why this path?

Simon: I came into the industry from technology. There are no middlemen. There are no brokers, no master brokers, no sub-distributors. If you want to do a deal with Google, you pick up the phone and you call Google.

I came in with that mind frame. So when I started calling on grocery, and they say, Oh well, you got to go through this broker, and then I call the broker, and they don't want to take me on because I’m too small, and I go talk to distributors and distributors don't want you unless you have business. And then, once I would get a yes from a grocery or drugstore, the slotting fees were so enormous there's no path to profitability.

My go-to market from 2014 to like 2017 was 100% food service. I went directly to Google, Facebook, Uber, Oracle, Intel. I went into their corporate pantries. I used to walk into Google and walk out with an order. It was awesome. I came with fresh eyes and I just didn't know how the game works.

MP: And as you evolved the bar, you stuck to what other alternative channels?

Simon: When I say alternative, I mean TJ Maxx, Marshall’s, Burlington, Michael’s -- a lot of places you wouldn't think of. There's not a broker and there's not a distributor. They're really nice people to work with, they're looking for innovation. We did about a year and a half at Costco Canada.

MP: And convenience stores, I picked this one up at my local Wawa.

Simon: My most important channel, C store. C store is a more difficult channel. There's a lot of them. They were looking for innovation. They wanted cooler brands. We’re killing it in C stores.

MP: So, given these different and many channels, how does that impact your media and marketing plan for building a brand?

Simon: When I'm targeting C store folks, is it different than when I'm targeting people on Amazon, absolutely. Amazon -- we're split 50/50 male female. Jimmybars.com, we're at 80/20 female. C stores, we're about 50 to 55% female. So when we're targeting different people, our message is a little bit different.

Simon: Three pieces: Amazon, Google, Facebook. We're also starting to look at a site called Outbrain. So Facebook, I'm spending probably 30% of my spend. Amazon is about 50%, and then the remainder is Google.

I'm finding that because you're so far deep in the funnel on Amazon, it’s probably the most effective. It's not the cheapest by any stretch. On Facebook we're getting people to come to jimmybars.com, Google, also coming to jimmybars.com. We're actually starting to flirt with advertising on Facebook to send them to Amazon.

Also, we're starting to flirt with video. With TikTok in particular ,because we've got maybe 300 ambassadors around the world. We've asked them to come up with 10-second videos, got to be funny, got to be interesting, to get a pep talk about the brand. We reward them with three bars or whatever, and that's what feeds into TikTok, which ultimately feeds into sales. So we’re very bullish on TikTok.

MP: What are your core digital tactics?

The problem is, my competitors are some of the biggest brands in the world, and they're owned by Mars and Hershey’s. So if I'm going to conquest, I'm going to have to open up my piggy bank a little bit.

I also have the advantage because my brand is so specific -- plant based, functional, keto. We do a ton in keto, collagen and bars, etc. I can target those keywords to get the right users, but we're getting conquested like crazy, which is flattering in a weird way. I see some of these younger brands than ours ,and we're getting conquested. So if people put in Jimmy bars and Google, it comes up to another brand.

MP: What creative strategy have you taken?

Simon: It's a little cheeky, no pun intended. Everything we do we tried to do with a little bit of humor. While the natural foods world takes itself pretty seriously, we wanted to do stuff that's funny. “OMG! JiMMY’s NAKED!” Obviously it's naked bars, but the name Jimmy lends itself to think it's something else.

Our bars are pretty, for lack of a better word. This really killed it, so we have the bars themselves. They're eye catching. Our Tiffany blue color is very different from the other brands in the market.

But we attract people with the macros. So people see keto, 16 grams fat, 4 net carbs. And just seeing “Jimmy's naked,” people click on it, oh that's really funny, it's a funny brand. They read our brand story -- it's a family business, there aren't many of them left, and actually this was one of our highest performing digital ads.

MP: And you have a video using the “Eye of the Tiger” theme.

Simon: That goes along with how we like to have a little bit of fun. So we did a licensing deal with Jim Peterik from the band Survivor, who is the co-writer of “Eye of the Tiger” from the Rocky movies. It's still the number one workout tune on planet earth. He's a personal friend, and we filmed that in Chicago. And we've had incredible success with this because it's just fun. It's a fun video, it gets you to the point to unleash your inner rock star -- fun, whimsical. So this ad was really effective. We had it all over YouTube. We also used a shorter version for preroll and post-roll on YouTube.

MP: I hear a lot of mixed opinions about marketing via social influencers. How are you using them effectively, and what's been your experience, especially in the last year?

Simon: So we have JiMMY! bar ambassadors, and they're all over the world. We've got a lot in Australia because we kill it in Australia, U.S. and Canada, some in Europe. We look for folks, male and female, that are part of “food traps.” Gluten-free, high-protein, low-sugar. They work out, or they’re travelers, whatever, and they have a following of 5,000+.

A lot of people started off paying LeBron James a trillion dollars. Sometimes that's really effective. I don't have that kind of money, so it's out of the question. So what I did was micro-influencer, where I started off in our backyard in Chicago, and then as we expanded it expanded, and so now we have influencers everywhere. Every one of them has a promo code [so] we can track sales.

We do not pay our influencers; we give them free product. Every month we send them product, and then they give them out to their friends, they chat about it. We track everything. So if they're not posting, or if they're not kind of playing along with what we want them to do, which is just enjoy the bars, give them to your friends and post, then they're out. We have a kind of a waiting list of ambassadors, so there's no shortage of people who want to work with us because you get free stuff.

What we found was really interesting, and that is, as we grew offline, the ambassadors started to promote the stores we were in. For example, we have a handful of ambassadors in Australia, and they talk about [going] to Costco Australia, buy your JiMMY! Bars and so on. And it's grown.

So online media is helping offline sales, offline sales is helping online media. It's something I actually studied 20 years ago when I was in digital media, and that is how they help each other. When Walmart is trying to drive people to walmart.com, every time you walk through Walmart it's helping walmart.com because you're going to forget something, and you're going to go to walmart.com and buy. And so we're finding that as we grow our footprint offline it's helping online.