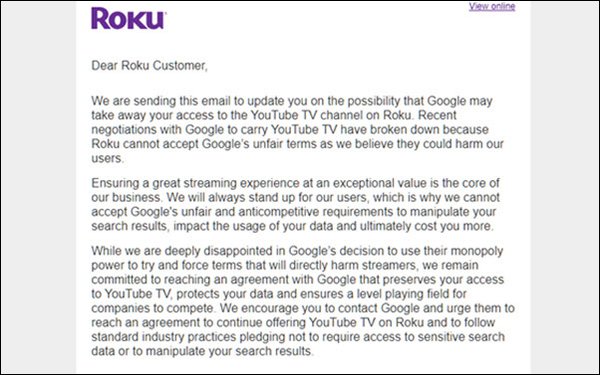 Roku has warned its users that the platform may lose access to YouTube TV — and is alleging that the situation is a result of anticompetitive behavior on Google’s part.

The carriage disputes that have plagued cable and satellite TV for decades began to infiltrate the streaming sector some time ago. A 2020 standoff between Roku and Fox that was settled just before the Super Bowl was one notable example.

But whereas most such disagreements center on money, this new Roku/Google feud involves accusations of anticompetitive behavior.

Roku sent an email to its customers on Monday morning that claims that recent negotiations with Google to continue to carry YouTube TV have broken down because Roku “cannot accept Google's unfair and anticompetitive requirements to manipulate your search results, impact the usage of your data and ultimately cost you more.”

“While we are deeply disappointed in Google’s decision to use their monopoly power to try and force terms that will directly harm streamers, we remain committed to reaching an agreement with Google that preserves your access to YouTube TV, protects your data and ensures a level playing field for companies to compete,” the message continues.

Roku urged users to lobby Google to reach an agreement that does not “require access to sensitive search data or manipulate your search results.”

Roku asserts that Google’s YouTube TV removal threat is an attempt to pressure Roku into giving Google preferential access to consumer data, reports Axios. It also alleges that Google is asking for special treatment such as creating a dedicated search results row for YouTube on Roku smart TVs, giving preferential placement to YouTube search results, and blocking search results from other streaming publishers while Roku users are using the YouTube app.

Roku claims Google threatened to require Roku “to use certain chip sets or memory cards that would force Roku to increase the price of its hardware product, which competes directly with Google's Chromecast,” and “believes Google is trying to tie the renewal of YouTube TV's distribution contract with Roku to force additional anticompetitive benefits for Google's separate YouTube app,” according to the Axios report. Roku declined further comment for MediaPost coverage.

Google offered a statement in response to Digital News Daily's request for comment: "We have been working with Roku in good faith to reach an agreement that benefits our viewers and their customers. Unfortunately, Roku often engages in these types of tactics in their negotiations. We’re disappointed that they chose to make baseless claims while we continue our ongoing negotiations. All of our work with them has been focused on ensuring a high quality and consistent experience for our viewers. We have made no requests to access user data or interfere with search results. We hope we can resolve this for the sake of our mutual users.”

Google referenced a Wall Street Journal  article from December 2020 describing Roku's "brash negotiating tactics" in regard to terms for carrying services such as HBO Max and Peacock.

Last October, the Justice Department and seven states attorneys general sued Google for anticompetitive practices in the search and search advertising sectors. Google has long denied engaging in such practices, and its parent, Alphabet, has fought similar antitrust suits brought in Europe.