'Drowning' In Sorrow: Another Day, Another Tragic TV Drama 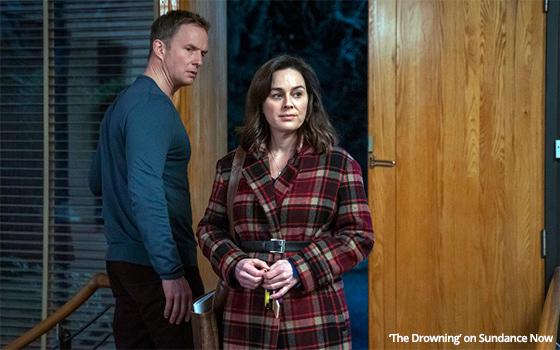 When I come across a TV drama titled “The Drowning,” I automatically steel myself for an experience that will be anything but cheerful.

“The Drowning” is the straightforward name of a drama series imported from the U.K. and making its U.S. debut this coming Thursday on two streaming services, the co-owned Sundance TV and Acorn TV.

Not surprisingly, “The Drowning” tells the story of a tragedy -- the drowning of a small boy -- and how this tragedy affected the boy’s mother, Jodie (played by Jill Halfpenny, photo above).

The series opens nine years later, when Jodie believes she sees her drowned son walking to school one morning with a group of other teens. Convinced that her son is not dead, she becomes understandably obsessed with finding him.

Predictably, others -- such as her now-ex-husband and local police officials, who she tells about the sighting -- think she is hallucinating.

So she decides to embark upon her own investigation with no one’s help -- a decision that figures to exacerbate some of the other areas of her life that she is already neglecting, such as a business she runs that is in danger of going belly-up.

Like other such tragic TV dramas, I have sometimes noted that they are sometimes about as entertaining as a funeral. And not only that -- they almost always have a funeral in them too.

In Episode One of “The Drowning,” the funeral is for Jodie’s dad, from whom she was estranged. As a matter of fact, she is estranged in some way or another from her entire family, and somewhat estranged from life itself too, stemming from her son’s death.

On the other hand, the tragic story of a child’s death (or the deaths of children, plural) is a subject that TV dramas have been returning to again and again in recent years. Generally speaking, the TV Blog is weary of them, as well as wary.

“The Drowning” starts streaming on Thursday (May 6) on Sundance Now and Acorn TV.