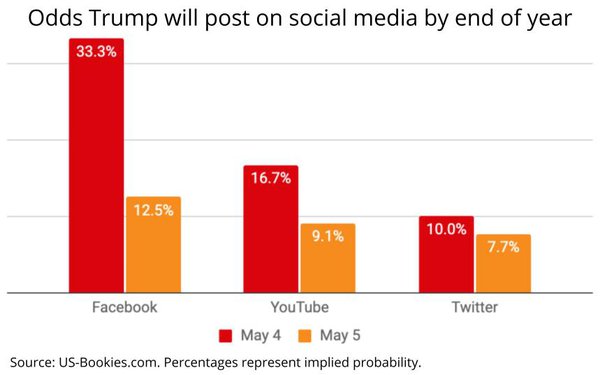 As pundits on all sides debate the meaning -- and merit -- of the Facebook oversight board to delay a permanent decision on the twice-impeached former President's ban from the social network, at least one community known to put its money where its mouths are is betting he's unlikely to post anything, anytime soon: gamblers. The odds of Trump posting anything on the Big 3 social media platforms by year-end dropped dramatically following the boards decision not to decide.

According to betting aggregator US-Bookies.com, the implied probability he will post on Facebook dropped more than half -- from 33.3% yesterday to 12.5% this morning -- following the indecision.

The problem is that even if he's not posting incendiary content, the stochastic terrorist will continue to live inside our heads -- even if just a little while longer -- because the prospects that he may do that someday soon remains unsettled.

“Most companies take it for granted that their products should be designed foremost for safety," Steven Brill, co-CEO of disinformation watchdog NewsGuard, notes in a statement following the ruling. But instead of safety, Brill asserts Facebook optimizes "engagement," because that's what it profits from: “Maximum engagement maximizes advertising revenues. As we saw at the Capitol in January, maximizing engagement and revenues also resulted in widespread sharing of hoaxes that led to violence and insurrection.”

Interestingly, there is ample evidence that Facebook may actually be operating at odds with its oversight board in this regard. In the board's own ruling, it noted that Facebook refused to answer some key questions it needed to resolve in oder to make a final decision, including whether Trump's "account suspension or deletion impacts the ability of advertisers to target the accounts of followers."

In fact, the board asked Facebook management 46 questions, but the company declined to answer seven of them, including how Facebook's newsfeed and other features impacted the visibility of Trump's content.

But regardless of what the board's final decision ultimately is, odds are we will still be living with Trump's presence on the mass social media platforms for a long time to come.

As my colleague Wendy Davis noted after reading the board's initial decision, "In the meantime, Trump has his own blog now, and I don't know if Facebook or Twitter are going to be able to effectively prevent his followers from screenshotting his statements and posting to their accounts."