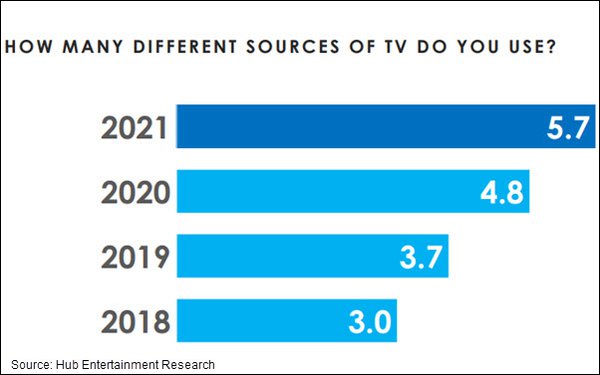 While some consumers are consolidating their streaming services, as of now, U.S. consumers are using more TV “sources” than ever, according to the latest annual Best Bundle study from Hub Entertainment Research.

The study — conducted among 1,600 U.S. consumers ages 16-74 who watch a minimum of one hour of TV per week — also finds 79% of TV consumers now using at least one streaming service.

That’s up only 2 points from the early pandemic days of 2020, when last year’s survey was conducted. But it’s fully 19 points higher than the percentage of those using a traditional pay-TV service (60%). And the pay-TV user percentage is 7 points lower than it was in 2020.

Further, the number who report using three or more of the top five paid streaming services (Netflix, Amazon Prime Video, Hulu, Disney+ and HBO Max) has leapt significantly since last year’s survey: from 28% to 40%, while the number using none of these has declined by 2 points. (HBO Max wasn't yet launched when the 2020 survey was taken.)

Overall, the number using two or more of the top SVODs has risen 8 points, to 59%. 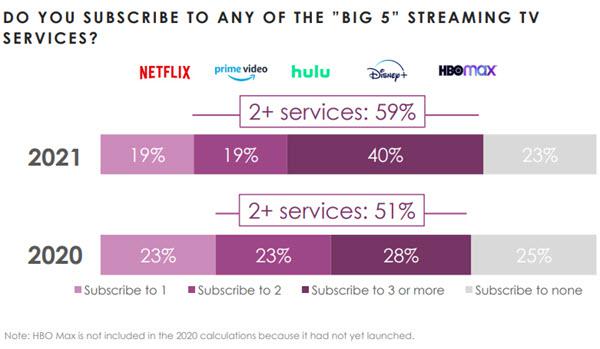 Another reason for the jump in the number of sources: The percentage using a free, ad-supported TV service is also up 8 points since last year, to 48%.

But using an array of sources isn’t necessarily a highly satisfying experience: 52% of all TV consumers say their current combination meets their needs “very well,” 42% “somewhat well” and 6% “not well at all.”

The “very well” percentage does rise along with the number of sources used, but even at eight-plus sources, it only reaches 63%. 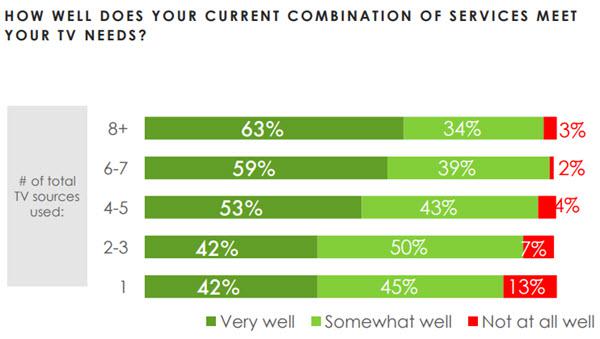 It would seem inevitable that the combination of consumers resuming out-of-home activities, the availability of more free services, and still-tight financial circumstances for many will result in some falloff in the growth of SVODs. In fact, Disney+,  as well as Netflix, saw subscriber growth slow in Q1.

However, that doesn’t necessarily mean a slowdown in overall streamlining of TV sources: 21% of this survey’s participants said they plan to add new “services” (meaning sources, free or paid) in the next six months.