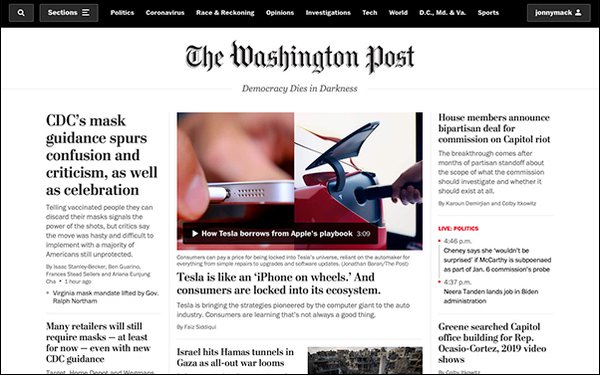 Newspapers are applying print standards to digital design and perhaps confusing their readers, judging by “The Values of Print: Affordances And Sensemaking for Newspaper Consumers,” a new study from the Missouri School of Journalism.

However, the design of the print newspaper developed “gradually over generations, largely before the advent of current human-centered theories of perception and design,” the study notes.

“As such, the modern product is as much an emergent property of the internal structures and processes of news organizations than one designed specifically with the needs of reader cognition considered.

The authors argue “the gaps in this not-fully-intentional approach to packaging of the print newspaper were revealed as the industry transitioned onto digital platforms.”

Publishers have imposed “the mental models of print onto digital news sites, and that this was done “without acquiescence to the vast differences between print and digital media and the need for news on any platform to clearly signal basic contextual cues including importance, section, timeliness and authority.”

The change also resembles the transition from analog to digital flight instruments, they add.

“Many people still love print newspapers, and to an extent, we also see that they like the digital replicas of print newspapers as much as they do the physical version,” states Damon Kiesow, a professor of journalism professions and co-author of the study.

But Kiesow adds: “Contextual clues that help tell readers what stories are important, why they should care about what stories they are reading and where to locate the news that is most important to them, are being weakened by structures missing in digital news.”

The study is based on the theory of “affordances,” as devised by psychologist James Gibson. Affordances include:

Physical affordances—The ability to “physically hold something, navigate a newspaper’s defined sections and create a physical archive of multiple editions for later viewing.

Perceived affordances—The ability to determine a story’s importance, and how elements are added for contextual purposes.

Relational affordances—The ability to generate trust and to allow the discovery of unexpected information.

“Gibson has a beautiful theory to help explain whatever we do as human beings, that there are meanings to those actions,” states co-author Shuhua Zhou, a professor of journalism.

Also contributing to the study was Le Guo from the University of Nebraska-Omaha.