Mark my words, new Fox series “Krapopolis” will either be the breakout show of the future, or it will go down in history as the greatest prime-time disaster since NBC scheduled “Supertrain” in the 1970s.

Given creator Dan Harmon’s most recent track record, I’d be willing to bet on the first scenario. So apparently is Fox, which along with its 2021-22 prime-time schedule Monday, unveiled it is getting into the “NFT business” to “create, sell and manage NFTs, tokens and digital goods.”

NFTs, or non-fungible tokens, utilizes blockchain technology to create indelible virtual assets -- including art -- that can be traded based on the perceived value of their scarcity (there’s only one of them).

NFTs have become the rage of the art world, and have become a next-new-thing conversation on Madison Avenue too, which is trying to figure out if they are more than smoke and mirrors.

And if Fox hadn’t called it out in the headlines of its new schedule announcement, I would have though it was just making an inside joke, pulling some legs, or selling a load of krap, especially given Harmon’s unique ability to poke fun at big think, futuristic concepts (see “Rick and Morty”).

Also, the tongue-in-cheek branding of a new series called “Krapopolis” seems a little too obvious, but as a diehard “Rick and Morty” fan, I’ll reserve judgement.

Meanwhile, kudos to Fox for leaning into NFTs while they’re hot, and for having the vision to leverage a unique creative asset, “Krapopolis: the first-ever animated series curated entirely on the blockchain,” to do it.

Fox clearly is the most visionary of the major TV networks, which has also been illustrated by its acquisition and integration of ad-supported streaming service Tubi, which also got a big plug during its upfront presentation Monday.

But what I really want to know, is exactly what Fox Entertainment CEO meant when he referred to “blockchain creative ads” and what does Fox’s NFT business have to do with them?

And do you need to use cryptocurrencies to buy them in the upfront? 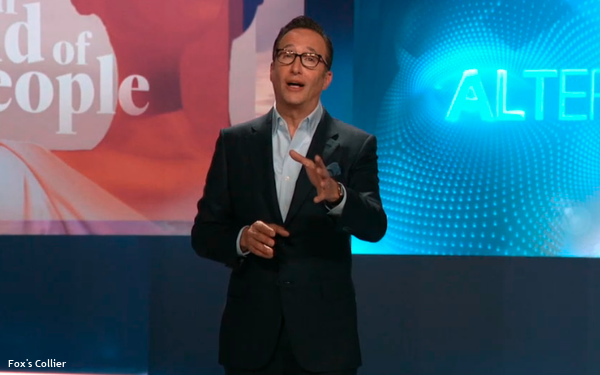