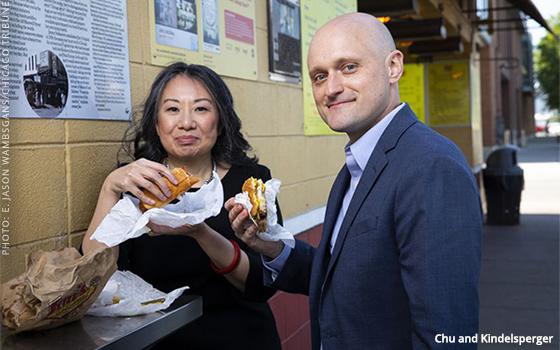 Chicago Tribune editors may be worried about the probable takeover by Alden Global Capital. But that hasn’t stopped them from naming two food critics to replace Phil Vettel, the popular writer who stepped down in January after 31 years in the slot.

The new food critics are Louisa Chu and Nick Kindelsperger.

Both had been food and dining reporters at the paper. But now they are in the top slot(s).

“If you want to know what’s going on in Chicago’s dining world, Louisa and Nick have the answers. Where to go. What to order,” states Colin McMahon, the ChicagoTribune’s editor-in-chief. “What are the issues that people in the industry — and, ultimately, diners — care about? Nick and Louisa have earned Chicago’s trust, and ours.”

Chicago has its own culinary styles — for everything from pizza to ethnic cuisine.

Chu started studying the food business at age four — folding menus in her family’s Chinese-American restaurant on the Near West Side.

Later, she was educated at Le Cordon Bleu Paris, and served as a cook at that city’s famed Les Ambassadeurs. She joined the Tribune in 2016.

Kindelsperger took a slightly different path. He launched The Paupered Chef, a recipe blog, and served as the founding editor of Serious Eats Chicago. He also joined the newspaper in 2016.
food, newspapers
Next story loading