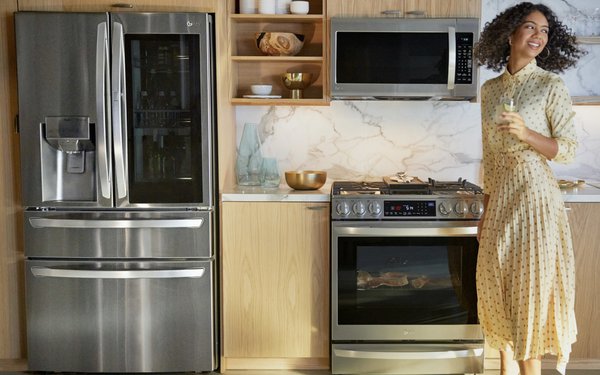 LG Electronics USA, whose InstaView kitchen appliances allow users to see inside with two knocks, has debuted a campaign it’s calling “We Will Knock You."

If that sounds like a certain rock song by Queen, it’s deliberate. LG’s new 15- and 30-second commercials, by the Opus United agency, jump to the beat of “We Will Rock You” -- in a cover version released Friday by British band The Struts.

“Not only did the ‘Knock Knock’ on the LG InstaView kitchen appliances match so well to the beat of the iconic ‘70s classic,” Gail Conroy, LG’s head of home appliance marketing, told Marketing Daily, “but the energy of the song was a perfect fit as we want everyone to ‘rock’ any occasion with an innovative, stylish LG Kitchen.”

The commercials show young adults energetically enjoying various features of LG InstaView refrigerators and ranges, with the shorter version concentrating only on the refrigerator. The ads end with a male voice saying “Rock any occasion with an innovative and stylish LG Kitchen” in the :30, and “Rock any occasion with an LG InstaView fridge with Craft Ice” in the :60.

The five-week campaign, from the PHD media agency, began Monday, and will run through June 20.

South Korea’s LG Electronics Inc. is increasingly relying on home appliances and TVs for its growth as it prepares to exit the mobile phone business July 31.

Last month, LG reported the highest quarterly revenue and operating profit in its 63-year history. Its home appliancedivision, which also includes air conditioning and smart home products,showed a23.8% year-to-year sales increase in the first quarter, to $6.03 billion, while its home entertainment division rose 34.9% to $3.6 billion. Mobile phone sales were $897.18 million. No sales comparison with the previous year was given, but the mobile group showed an operating loss of $251.63 million, a deterioration of 28% from 2020, as it ceased introducing new products.