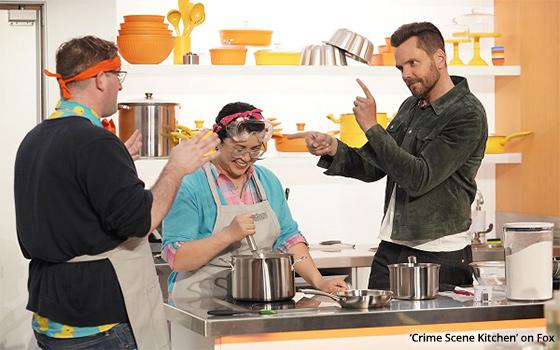 The summer TV season of weird ideas and easy paydays is upon us.

The show is, in fact, a benign baking reality show that is not all that different from a dozen other ones. However, what are we to make of the show’s title?

This title -- “Crime Scene Kitchen” -- does not exactly scream “benign baking show.” Instead, the first impression it gives is that this show is more likely to be a cookie-cutter crime show on one of the all-crime-all-the-time channels such as Oxygen or Investigation Discovery.

Or it could be a new twist on a home-renovation show on HGTV in which prospective homeowners learn that the house they are interested in buying was the scene of a violent crime -- which is why the house is such a bargain. Can a comprehensive renovation of this home’s crime-scene kitchen save the day?

This should go without saying, but I will say it anyway: In the Fox baking show, there is no actual “crime scene.”

Instead, the show’s off-putting title is supposed to describe -- cleverly, it is hoped -- the show’s central gimmick, which is: The show’s baker contestants are challenged to guess from the available evidence left lying around the kitchen the identity of a baked item that was produced in the kitchen just before they arrived.

Confused? Of course you are. To explain further: On each one-hour episode of “Crime Scene Kitchen,” pairs of contestants -- real bakers from around the country -- come onto a game-show set where there are five kitchen stations.

Each of these kitchens has been strewn with clues to what was previously made there -- a package wrapper here, an unwashed mixing bowl there -- and these professional bakers are then supposed to add up the evidence, make their guesses, and then bake the very item they have chosen.

They are then judged on the quality of the baked confections they have made, and also on whether or not they came up with the correct cakes or pies in the first place.

The actual show, if not the icky title, is pleasant enough. Host Joel McHale (seen in the photo above) takes an appropriately laidback and sardonic approach to overseeing these proceedings in what might rank as some of the easiest money he has ever made.