What Are We Watching? John Wick, Jason Bourne And Columbo 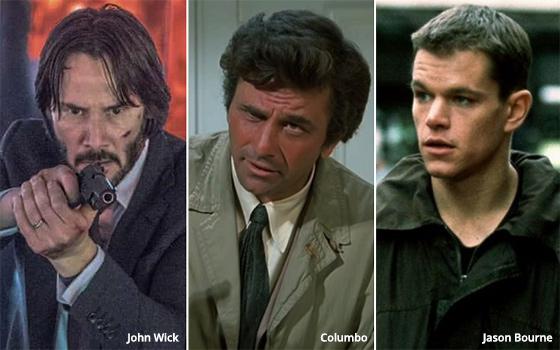 Not that long ago, the credits on an old episode of “Columbo” seen on a Sunday night on MeTV included as director and screenwriter, respectively, Steven Spielberg and Steven Bochco.

The episode, titled “Murder By the Book,” premiered in September 1971 when Spielberg was 24 and Bochco was 27.

It was the only “Columbo” episode Spielberg would direct, though he directed a handful of other TV shows and TV movies before landing his first feature film, “Sugarland Express,” three years later.

Bochco’s name, however, comes up on multiple “Columbo” episodes from that period, as writer and/or story editor.

These two bold-faced names seen on an old TV show from 50 years ago were illuminating. They help illustrate something that I have long believed when it comes to designating this or that decade or era, or some other aggregation of years, as a TV Golden Age characterized by an unusually high number of quality TV shows all airing at around the same time.

Maybe the onset of the 1970s was a Golden Age in the making, or maybe it was not. The fact that Steven Spielberg and Steven Bochco both worked together on a “Columbo” episode was likely coincidental, but worth noting in 20-20 hindsight because of the future careers each of them would have -- one in television (Bochco) and the other (Spielberg) in the movies.

“Columbo” was a particularly well-written TV show, but perhaps not one that comes to mind for too many people these days when it comes to binge-watching.

In our household, the show has become something of a habit on weekend evenings -- so much so that we are nearing the end of the show’s entire cycle of episodes, which actually comprised two different eras.

The NBC “Columbos” are now seen every Sunday night on MeTV. The ABC “Columbo” TV movies are seen on Cozi TV, which airs two of them in a row every Saturday night. They are great examples of high-quality, “throwback” television.

To many, grazing is old-fashioned. Many people prefer to sign on to a streaming service and browse the menus, which are always extensive. But for many other people, browsing the streaming menus represents a chore they would rather not do.

If it were not for the grazing method, I might never have discovered the joys of John Wick or Jason Bourne.

These are the action-movie anti-heroes played by Keanu Reeves and Matt Damon, respectively, in a series of action pictures that are on TV so frequently that you would think it would be easy to become sick of them.

But around here, the opposite is true. The more they are on, the more we watch, for the simple reason that the high-speed chases and complex, choreographed combat scenes in both of these series have to be seen to be believed.

They stand up to multiple viewings, over and over again -- a fact that is likely known to the basic-cable channels that air them the most -- because you find yourself trying to figure out how on earth they made these scenes, in much the same way that one might marvel at an elaborate magic trick staged by a master illusionist.

The point of this blog, if there is a point, is that the TV-viewing experience is a very personal one, which is to say: Every person, and every household, grows and develops their TV habits differently.

In our home, it is still about looking for something to watch the old-fashioned way, with a cable remote. And since we are far from unique, we assume millions of others are still doing that too.

While clinging to this time-honored method of finding something to watch on TV, I am not convinced, as others are, that streaming will ever completely replace over-the-air or basic-cable TV, at least not in my lifetime.

television
1 comment about "What Are We Watching? John Wick, Jason Bourne And Columbo".
Check to receive email when comments are posted.
Next story loading