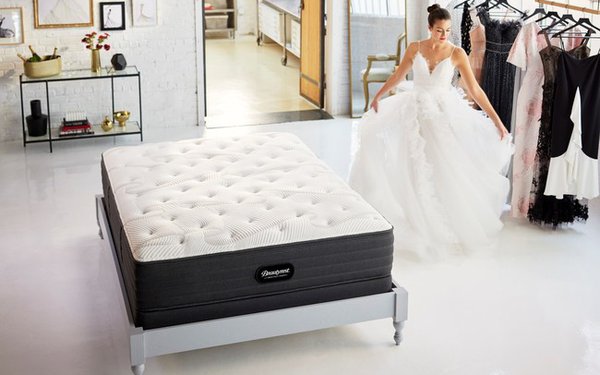 It's an unexpected twist in the turbulent bedding business: Mattresses are usually treated like blank slates to be covered by designer sheets, not a canvas themselves.

Beautyrest is owned by Simmons Serta Bedding, the giant (and debt-laden) industry heavyweight.

"Our insights revealed an opportunity to target engaged and newly married couples," says Taylor Beckstead, senior director of marketing for Beautyrest, in an email to Marketing Daily. "Couples are more wellness-minded than ever before and enjoy indulging in ways to enhance their health together, and sleep is a crucial component of that."

He says marriage is a top trigger for mattress buying, with roughly one-quarter of couples buying a new bed together. "And our consumers are on top of the latest trends from fashion to technology, so partnering with a designer allows us to provide a uniquely premium mattress."

The bed itself is based on the company's T3 pocketed coil technology, meant to help couples sleep better when a partner moves in bed. And with Siriano's top-panel design, inspired by a black-tie affair, it's hoping to create a must-have registry item.

Ads, a collaborative effort between its in-house team, Badger & Winters, and PR shop ICF Next, are running on digital and social channels. They also appear in-store at key retailers, such as Macy's.

For now, however, the mattress is only available as a direct-to-consumer purchase through Beautyrest.com.

It's just the latest in a flurry of innovations from the company, as it tries to regain some mojo in the fiercely competitive category. Disrupted by D2C players like Casper, Purple and Nectar, the company responded several years ago with the purchase of D2C Tuft & Needle back in 2018.

Beautyrest, a 90-year-old brand, also launched the Harmony Lux Hybrid mattress in its sustainability collection, which incorporates recovered ocean plastic. That launch includes a promotion enabling one lucky couple to spend the night at the Long Island Aquarium.

But it is losing share and struggling with debt. "Serta's operating performance during 2020 declined materially and Moody's expects this weakness to continue through 2021," writes Moody's Investors Service, in a report issued earlier this year. "As the company continues to lose market share and carries a very high-interest burden.

Serta Simmons Bedding is owned by Advent International and generates about $1.9 billion in annual revenue.