F-Word In The Title Puts Curse On AMC Comedy-Drama 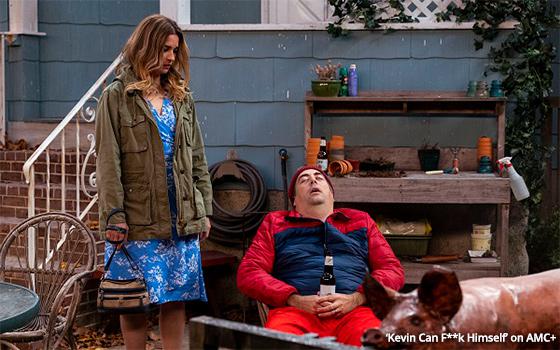 The off-color titles of her TV shows apparently present no obstacle to comedic actress Annie Murphy, who was last seen in “Schitt’s Creek” and now stars in “Kevin Can F**K Himself.”

F-words with asterisks (or hyphens) in the middle of them are all the rage right now in our popular life (other people usually apply the word “culture” here, but I don’t agree with that) -- most notably in the titles of a growing number of books that seem to flourish on the bestseller lists and feature prominently on the Barnes & Noble home page.

TV has also gotten into the f-word act in its titles. One show that comes to mind is the Viceland food-and-travel show called “F*ck That’s Delicious.” It was reviewed here in 2016, and none too favorably either.

At the time, I resisted the temptation to write “F*ck, this food show is tasteless!” and other such sentences. Instead, I managed to communicate my intent using English words that were not profane.

I guess that is where I always come down on these f-word titles. If I can manage to get through a whole TV blog without using the f-word, then anyone can do it. Believe me, I’m no smarter than anybody else.

OK, now that I have my usual, quixotic (meaning: futile) speech-making about the overuse of the f-word on TV out of the way, here are some specifics about this show called “Kevin Can F**K Himself,” which starts streaming this coming Sunday (June 13) on AMC+ and then premieres the following Sunday (June 20) on AMC, on cable.

Although “Kevin Can [you know, ‘Eff’] Himself” is billed as a dark comedy, it is more accurate to describe it as half comedy, half drama. Years ago, someone coined the word “dramedy” to create a category for shows that were not quite comic and not quite tragic, but somewhere in between.

“Kevin Can [Bleep] Himself” is not quite like that. It is literally half a sitcom, and half a drama, and sometimes a dark one.

The show’s premise is clever -- a working-class woman named Allison (Annie Murphy) living in or around Boston experiences her life with her thoughtless slob of a husband and various neighbors and family members as a grotesque parody of a terrible sitcom.

To put this concept across, the scenes in which she interacts with her husband, Kevin (played by Eric Petersen, seen in the above photo with Murphy), and the rest of this show’s hangers-on are rendered like a clichéd sitcom, right down to the constant, overly loud insult humor and the uproarious canned laughter that follows every unfunny line.

These scenes are produced in such an exaggerated way that they do not even remotely resemble real life. Instead, they are “real life” as it has been imagined on decades of TV sitcoms.

By contrast, when Allison is off in another room alone, or going about her personal business in her neighborhood, the show suddenly turns dramatic, as we learn how much Allison loathes her husband, her home and her friends and neighbors -- in short, everything about her life.

It is an interesting premise that intrigues when it is first encountered and understood. But over time -- in my case the 44-minute running time of the series’ first episode -- that initial interest gave way to ennui.

It is hard to identify what went awry for me, but one issue might be that the sitcom part of the show is a terrible sitcom, and the drama part is only a so-so drama. So, what one is left with is a mediocre show with a split personality.

In other words, the premise goes from being clever at the outset to one that doesn’t work by the time the first episode was over.

It was enough to make me think: Eff this, I’m going to go watch something else.

television
2 comments about "F-Word In The Title Puts Curse On AMC Comedy-Drama".
Check to receive email when comments are posted.
Read more comments >
Next story loading