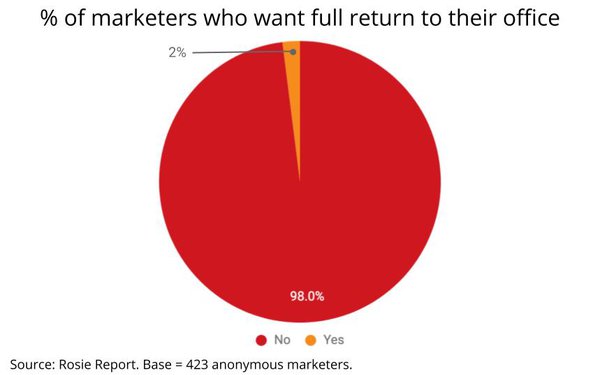 Only 2% of marketers would like to see a "full return" to the office following the COVID-19 pandemic's work-from-home protocols, according to a survey being released later this month by We Are Rosie, a community of marketing executives.

While full details of the study won't be released until June 23, a sneak peak released to the press indicates 100% of those surveyed would at least like to have the option of working from home in the future.

More than two-thirds (68%) said they felt they were "doing their best work" while working from home during the pandemic.

“COVID expedited a great awakening to the incredible potential and viability of remote and flexible work,” Rosie Founder and CEO Stephanie Nadi Olson said in a statement, adding, “More than just a means of adaptation or a way for employers to reduce overhead, deploying hybrid models is good for workers: it promotes diversity, and fosters growth and creativity."

Recently, the Association of National Advertisers released findings of its second executive travel survey following the COVID-19 pandemic and found that 87% of respondents have been vaccinated, but a significant percentage still have no plans to travel for business or personal use.