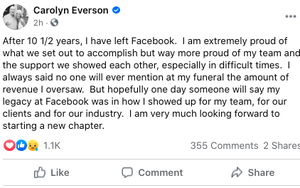 After more than a decade as Facebook's chief face on Madison Avenue, Carolyn Everson is leaving the company.

Everson, who has been with Facebook since March 2011, fittingly announced her departure in a post on her Facebook account, noting that she is "extremely proud" of what the social network has accomplished during her tenure, but did not explain why she has left or what she might be doing next.

"I always said no one will ever mention at my funeral the amount of revenue I oversaw. But hopefully one day someone will say my legacy at Facebook was in how I showed up for my team, for our clients and for our industry," she posted, adding: "I am very much looking forward to starting a new chapter."

As vice president of Facebook's Global Business Group, Everson was the company's top executive working with advertisers and agencies.

Prior to Facebook, Everson was a top ad sales executive at Microsoft, MTV Networks, and Primedia.