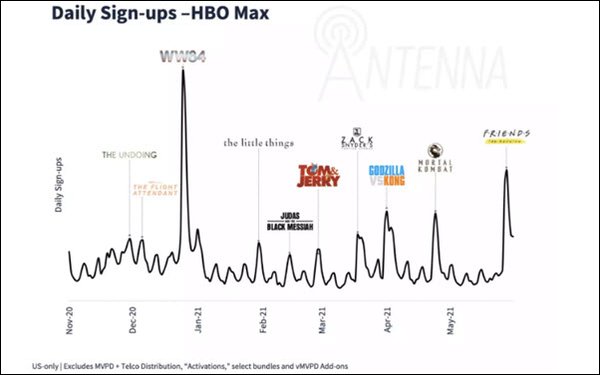 HBO Max’s “Friends: The Reunion” generated the most single-day sign-ups for the streaming service this year, according to data from market measuring firm Antenna.

The heavily promoted reunion — the first time the cast of the phenomenally successful series has been together on the screen since the series finale 17 years ago — outperformed the movie releases “Godzilla Vs. Kong,” “Mortal Kombat” and the Max exclusive “Zack Snyder’s Justice League,” and the hit series “The Undoing,” among other content.

However, “Wonder Woman 1984 — which last December became the first Warner Bros. movie to be simultaneously released on HBO Max and in theaters — remains HBO Max's  biggest sign-ups driver so far, according to Antenna.

For its debut weekend, "Wonder Woman 1984" generated 4.3 times the number of signups as the average for the previous three weekends in December, Antenna reported at the time.

The “Friends” reunion premiere was watched by about 29% of U.S. streaming households, nearly matching “Wonder Woman 1984”’s 32%, according to TVision data. More than 55% of the viewers were female, and more than half of all viewers were in the 25-54 age segment.

In the first three days after the reunion’s premiere on May 27, 57% of the new subs came from women, versus 43% for men, according to Antenna.