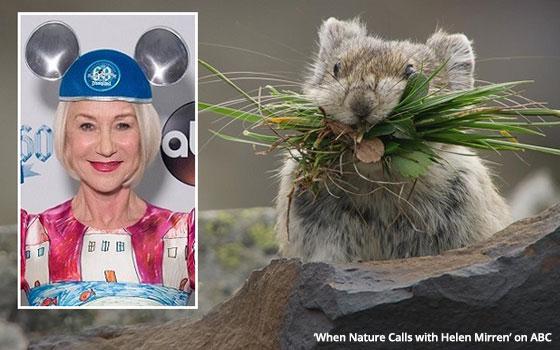 The challenges of naming a TV show are reflected in the title of a new lighthearted summer series premiering Thursday night on ABC.

But those great movie comedies starred Jim Carrey as the titular pet detective. To my knowledge, Helen Mirren has never played a pet detective.

Nor will anyone ever confuse the work and career of Dame Helen Mirren, Oscar winner for “The Queen,” with the manic comedy of Jim Carrey.

And yet, here we are with a TV show title that may or may not have been suggested by an old Jim Carrey movie, but whose wording also suggests something else entirely -- namely, that Helen Mirren (above photo, left) is hosting a summer series that inexplicably takes up the topic of going to the bathroom.

For that is what the phrase “when nature calls” has traditionally meant. So, when you word a title “When Nature Calls With Helen Mirren,” you take the risk of conjuring up all sorts of images that have nothing to do with what this show is actually about.

With this confusion in mind, the TV Blog feels obligated to set the record straight about this show and its title. To wit: “When Nature Calls With Helen Mirren” is not in any way some sort of humorous look at people’s bathroom habits.

And it certainly does not concern itself with the bathroom habits specifically of Helen Mirren, even if, to be perfectly frank here, that is what the wording of this title suggests (or might suggest to some).

Instead, the show itself is some kind of comedy, nature-documentary hybrid. As of yesterday, it was not available for preview, but according to a press release, the show has video of various animals doing animal things, such as the little fellow (possibly a squirrel) in the photo above (right) whose mouth is filled with grass.

While the animals go about doing what comes naturally to them, comedians will be heard giving voice to the animals in (hopefully) humorous ways.

Helen Mirren is positioned as host and narrator. There is no indication that we will hear her own distinguished voice emanating from the mouths of any of the animals featured in the show.

“The series features comedians putting words into the mouths of beautiful beasts, teeny-tiny frogs, beatboxing badgers and more in captivating footage from all over the world,” said the press release, which for some reason did not include the names of any of the comedians who are supposedly contributing their voices to the show.

Later on, a prepared quote attributed to Rob Mills, executive vice president of unscripted and alternative [content] for Walt Disney Television, hints that at least somebody sees the humor in this show and Helen Mirren’s association with it.

“When you’ve won an Oscar, an Emmy and a Tony [as Mirren has done], the only way to further add to your legacy is to narrate ‘When Nature Calls With Helen Mirren’,” he is quoted as saying.

It is a fairly safe bet that the quote was meant to be sarcastic, but with TV executives, you never know.

Photo of Helen Mirren courtesy of ABC, from “The Wonderful World Of Disney: Disneyland 60,” a 2016 ABC special celebrating the 60th anniversary of Disneyland.

science, television
1 comment about "'When Nature Calls With Helen Mirren' Is Year's Ickiest Show Title".
Check to receive email when comments are posted.
Next story loading