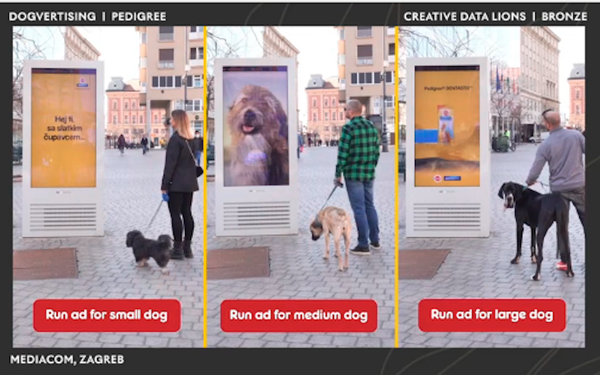 It may not have taken the Grand Prix -- or even a gold or silver award -- but MediaCom Croatia's "Dogvertising" campaign won the hearts and minds of many involved in this year' Creative Data Lions.

The campaign, which won a bronze, was a truly innovative and creative use of data on several levels.

On the surface, the campaign utilized camera and sensor technology on digital out-of-home screens around Croatia to first detect when dogs and their owners were facing the screen, and then serve them ads for client Pedigree only dog owners would care about. As a result, there was zero waste in audience reach, and the campaign was even able to target specific types of dogs -- not based on their breeds, but based on the size of the dog -- providing ads for Pedigree products aimed at different sizes.

Best of all, the campaign executed an incredibly powerful utilization of data that might otherwise have raised hackles among Europe's hypersensitive regulators in the post-GDRP era of data targeting.

"GDPR applies to humans, but nobody said anything about dogs," quipped Marko Matejcic, head of strategy and insights at MediaCom Croatia, during the Creative Data Lions debriefing.

In truth, Matejcic said the campaign did not collect any personal data, but merely utilize cameras and sensors to detect when a dog was present in order to "trigger ads in the video stream."

He said the result was a tripling in the campaign's ad effectiveness.

The campaign was so successful, he said MediaCom is thinking about rolling it out into other markets worldwide.