Happy Days Are Here Again: Return Of 'The Late Show With Stephen Colbert' 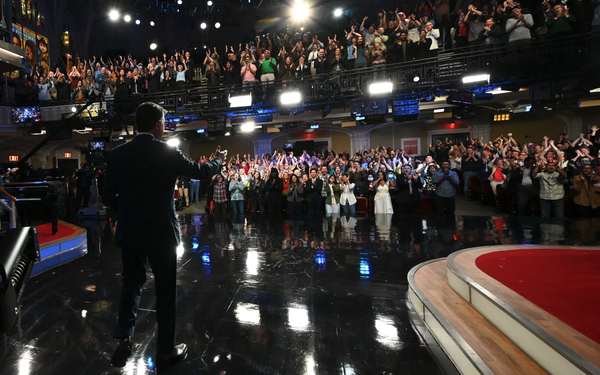 Never underestimate the power of a live, engaged and joyful TV audience to lift your spirits.

That’s the lesson I learned when I tuned into CBS’ "The Late Show With Stephen Colbert" last week. Colbert returned to the Ed Sullivan Theater in New York with a packed house for the first time since lockdown early last year.

There was something about the atmosphere that made you want to smile before the host cracked his first joke. Colbert himself, as he told us several times, was also hyper-energized by his ability to engage with a live and enthusiastic audience once again.

It's one more small sign of a return to post-pandemic normalcy.

The audience was pretty pumped up and laughing a lot at all the right times, as opposed to that fakey canned laughter that many sitcoms still use.

Of course, it didn’t hurt to have Jon Stewart, his good friend and former colleague from "The Daily Show" on the program as his first guest. He was on his A game.

And speaking of A games, how talented is Jon Batiste? Singing, dancing, keyboarding — he put it all on display opening night. He and his troupe added a fun party-like atmosphere to the show's live return.

And post-Covid, we’re all hoping to celebrate a bit more, right? Hopefully, Colbert and company will keep the party going. They sure got it off to a great start last Monday.