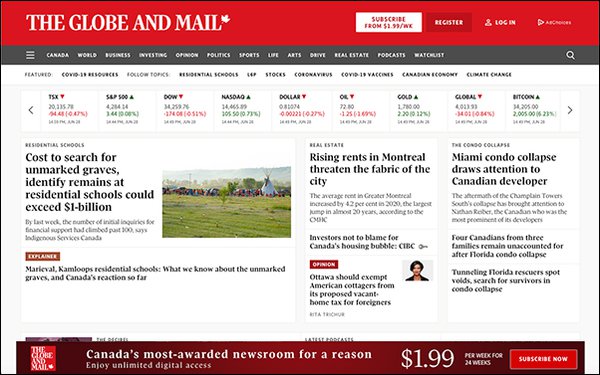 Consumers often go to a site to read an article and are promptly told that they must pay to continue. So they leave and the publisher loses a potential ad impression because an inability to distinguish between types of readers.

Canada’s Globe and Mail is offering a tool that can determine whether to present a paywall. Sophi, a technology developed in-house, uses deep-learning technology to automate that and other publishing decisions, according to a session at the Online News Association conference, as reported by NiemanLab.

This is not a new idea, but more publishers might consider it, given the ubiquity of paywalls and the desperate need to reach readers.

The Globe and Mail itself “has no evenly applied article limit,” Nieman notes. “Some readers might never encounter a paywall.”

The result? The paper has seen subscription conversions increase by 51% and email registrations more than double. And, it credits Sophi with helping it generate 170,000 digital-only subscriptions.

Moreover, the paper claims that Sophi has been adopted by over 50 outlets run by 11 publishers, per Nieman.

“Take the guesswork out of identifying subscriber-only stories with best-in-class user- and content-propensity modelling and targeting,” the site urges publishers. “You’ll finally understand which stories users will pay to access, and which stories deliver more value through advertising revenue.”

How would this work?

A reader of general news might be less likely to subscribe to a certain product than a business reader. Sophi can determine this and pivot to offer an email registration to that general reader, instead of hitting them with “the same message again and again,” moving forward.

Geography is another variable, although it’s not cited here: Should a casual Boston-based browser be hit with a paywall when trying to read an article in a Chicago periodical?

At the Globe & Mail, editors have the ability to override the algorithm in the interest of public good.  For instance, they eliminated paywalls when wildfires were raging in Western Canada.

Here’s one consideration: one-size-fits-all paywall demands can aggravate readers. And they may never return, no matter what the story.