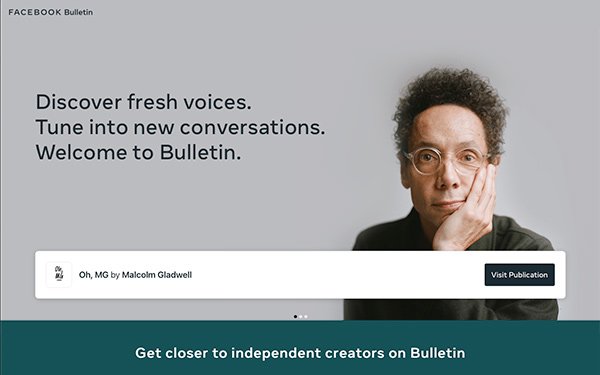 Facebook has unveiled its much-discussed newsletter service Bulletin, featuring a small group of writers at the start.

CEO Mark Zuckerberg said the product is designed to help writers earn a living amid changes in the media ecosystem.

Bulletin allows writers to self-publish their work in various formats and includes a tool to allow them to charge for newsletter subscriptions and website content.

Either way, Bulletin will compete with Substack.

At first, Bulletin will feature news from writers who focus on sports, environment, fashion and other neutral topics. It will avoid those who focus political subjects.

Bulletin’s home page features writers Erin Andrews, Mitch Albom and Malcolm Gladwell. As each one rolls on, readers can click through to their publications.

Writers, who have reportedly been lining up to participate, are being offered two-year contracts, according to Digital Information. Presumably, they will have to demonstrate the ability to drive traffic.

Bulletin will not be directly available on Facebook’s main application. One reason is that Facebook wants to avoid paying commissions to Apple and Google Stores, Digital Information writes.

Instead, readers can click through a link on Facebook’s main application, opening a browser on which all Bulletin news will be available, that report continues.

Facebook is not the only social media giant to reach out to small writers and publishers. Twitter has a pending service called Super Follows. Using Super Follows, publishers will also be able to charge for various content forms, including email subscriptions.

The goal is to provide “monetary incentive models for creators and publishers to be directly supported by their audience,” according to a presentation by Kayvon Beykpour, product lead, and Dantley Davis, head of design and research for Twitter.
facebook, news, online publishing, social media
Next story loading