CW Imports A Deadpan Comedy About The Undead 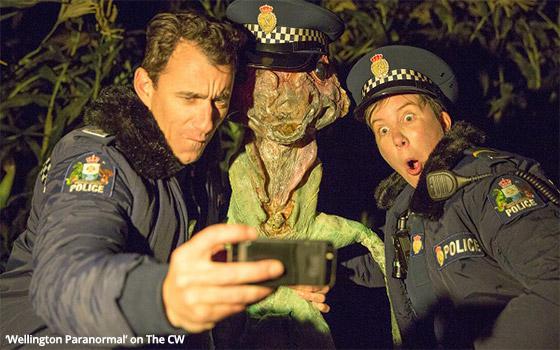 A new summer comedy series comes to The CW this weekend all the way from New Zealand with top talent attached.

Two of the three executive producers of the show, a police spoof called “Wellington Paranormal,” are Jemaine Clement, best known as one half (with Bret McKenzie) of “Flight of the Conchords,” and fellow New Zealander Taiki Waititi, award-winning performer and director of movies such as the incredible “Jojo Rabbit” and Thor: Ragnarok.”

The third executive producer of “Wellington Paranormal” is Paul Yates, who also does some of the writing on the series.

On “Flight of the Conchords,” the late, great comedy series on HBO, one of the show’s self-effacing comedy bits explored the difficulties Americans (specifically residents of New York City, where the show took place) would sometimes have in trying to understand Jemaine and Bret’s New Zealand accents.

On “Wellington Paranormal,” this “accent gap” is not explored, since Americans are not a factor in this series that takes place in the New Zealand capital of Wellington.

But for Americans watching this show for the first time on The CW, the New Zealand accents might take some getting used to. The show first premiered in New Zealand in 2018.

Speaking for myself, while previewing the first episode of the show for this TV Blog, I became accustomed to the accents rather quickly -- faster and easier, in fact, than many of the British accents I have struggled to decipher on many shows imported to U.S. television from England.

“Wellington Paranormal” is a dead-pan comedy that concerns itself with a unit of the Wellington P.D. that is assigned exclusively to cases and incidents with extraordinary characteristics, such as the teen girl in the series’ premiere who is behaving strangely and is likely in the grip of a demonic possession.

The show can be described somewhat as a blue-collar “X-Files.” In fact, the names of Scully and Mulder from that show are invoked in Episode One of “Wellington Paranormal” by Officer Minogue, one of the two WPD officers who make up the paranormal unit.

He is played by Michael Minogue, seen in the photo above with his paranormal-unit partner, Officer O’Leary (played by Karen O’Leary). In the photo, they are evidently taking a selfie with some sort of ghoul or demon.

In its publicity materials for “Wellington Paranormal,” The CW describes the show as a spin-off of “What We Do In The Shadows,” a well-regarded 2014 mockumentary film about vampires and other paranormals living in a Wellington suburb that was also conceived by Clement and Waititi.

The Minogue and O’Leary characters were introduced in that film, but it is also true that the movie has already spawned a mockumentary TV series, also called “What We Do In The Shadows,” on FX.