On Hulu, McCartney And His Music, In Black And White 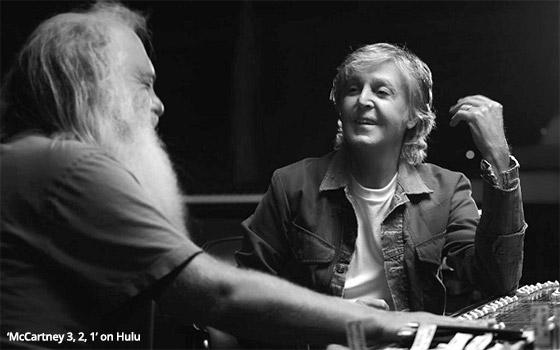 Only the most avid music fans will be able to pay consistent attention to the conversations of Paul McCartney and music producer Rick Rubin in their interview series titled “McCartney 3, 2, 1” and premiering on Hulu next Friday.

The series, consisting of six half-hours, has McCartney, 79, and Rubin, 58, talking to each other about McCartney’s long career of recording, composing, songwriting and performing.

They undertake these discussions in an undisclosed location where they are cast in dim light and filmed in black and white (as shown in the photo above).

In this semi-darkness, the two talk about, and listen to, various songs -- Beatles songs and others written by Paul in the years after he was a Beatle -- and the way in which the recordings were assembled.

Much of it is fascinating, and made accessible by the fact that so many of the songs, particularly those by the Beatles, are so familiar to one and all.

So, when McCartney and Rubin listen to “Penny Lane” and focus on the song’s distinctive piccolo trumpet portion, you recognize it right away and think (as I did), “Hmm, a piccolo trumpet … never heard of that before!”

But at the same time, the dissection of the songs and their creation can grow tiresome to those of us who do not have the fortitude for this level of detailed, granular analysis.

At one point in Episode Two, for example, Paul gives some lengthy instruction on how to play piano chords and then fashion them into songs.

Eventually, this exercise in basic piano instruction morphs into “Let It Be,” as if Paul is implying that anybody can write “Let It Be” and other Beatles hits if they just master a few simple chords.

One of the characteristics of the show that dulls the senses is the black-and-white cinematography, plus the fact that the conversations between the two are only occasionally broken up by still photos or a brief video snippet of the Beatles in action.

One also gets the feeling that the stories Paul tells -- such as the anecdote about how a roadie’s offhand request to “pass the salt and pepper” evolved in Paul’s mind into “Sgt. Pepper” -- have been told many times before, not least because McCartney has given many such in-depth interviews over the years.

Still, speaking for myself, I had never heard that particular tale, so it was news to me. In fact, much of what McCartney says in the show might be news to many, but only if they have the fortitude to stick it out.