As 'Cousin T,' T-Pain Throws Down The Love For Lipton 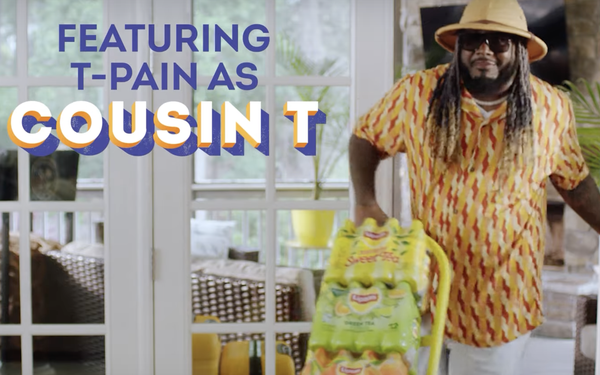 The “Have Some Tea With Cousin T” campaign from the Ten35 agency features T-Pain in spots that evoke 1990s sitcoms—complete with audience applause and laughter.

In this ad  titled “Dinner,” Cousin T shows up unexpectedly at his aunt and uncle’s home bearing three cases of Lipton—and a suitcase—in search of “a real family dinner together.”

In “Road Trip,” the same family members talk about their favorite music while sampling green and Georgia peach teas. “Grillin’” has Cousin T and his uncle sharing outside cooking skills.

T-Pain is a native of Florida, and one of the reasons he was chosen to be the face of the 130-year-old Lipton brand is because of his popularity in the South.

“His music specifically has a major influence on the South geographies, whether you talk about Florida, Georgia, the Carolinas, Alabama and Mississippi,” Hamlett says.

Along with Southern consumers over-indexing for tea purchases, “Lipton does have a high skew of African-American consumption.”

Consumers who text #GRILLWITHT to 99888 or visit GrillWithT.com can register to win one grand prize consisting of a barbecue catered by a local Black-owned restaurant.

“Have Some Tea With Cousin T” comes on the heels of the June launch of Lipton’s “Stop Chuggin’ Start Sippin’” campaign that debuted during the CMT Music Awards last month.

In this spot, singer Luke Bryan—who was nominated for 23 CMT awards this year—answers 23 “tricky, thought-provoking” questions. While he doesn’t directly promote Lipton, he does voice a preference for tea over lemonade.