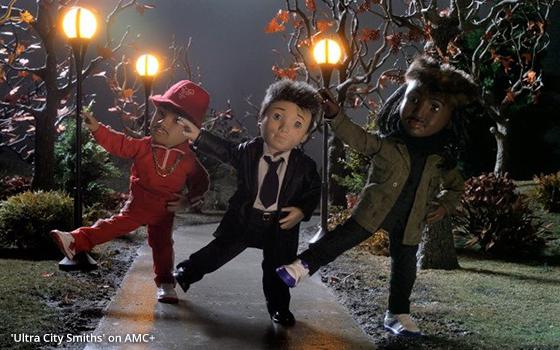 A high level of creativity -- and the astronomical effort that goes along with it -- are evident in every frame of the new animated series called “Ultra City Smiths” premiering Thursday on the AMC streaming service AMC+.

This is an incredible made-for-TV production in which an entire believable world has been conjured out of thin air.

It is the world of a fictional metropolis called Ultra City whose residents are regular people who just happen to be portrayed in this animated series by what look to be repurposed children’s baby dolls (as seen in the above photo from the show).

The press material says the show has been produced with the technique known as stop-motion animation, in which the show’s characters (in this case, the dolls) are posed, then shot for a frame or two, and then reposed and shot again ad infinitum until it looks something like movement.

While at least some stop-motion filming was done here, this show’s animation comes across as a lot more sophisticated than Gumby or the California Raisins. I suspect that the end product was post-produced using more modern means to smooth out some of the rough edges.

The reason I suspect this is because the end result is amazing. While watching this show, it is possible to completely accept and believe that these characters are real people, and not stop-motion children’s dolls. That is no mean feat.

Overall credit for this show goes to Steve Conrad, who is listed as creator and showrunner. After watching the first two episodes of “Ultra City Smiths,” I now feel the need to address Mr. Conrad directly (although my innate lack of self-confidence has me doubting he will ever read this): Mr. Conrad, I am in awe of you.

“Ultra City Smiths” currently consists of six half-hour episodes, the first two of which will drop Thursday on AMC+. The remaining episodes will drop on subsequent Thursdays. Sometime this fall, all six episodes will air on AMC.

The show is about a very tough, dangerous large city. Aspects of the show’s locale are modeled on New York City, but at the same time, Ultra City is a place all its own. The “Smiths” of the title are a wealthy, powerful family.

As the show unfolds, they are on the trail of the patriarch of the Smith family who has mysteriously gone missing.

Along the way, they meet various denizens of the Ultra City demimonde who are voiced by a succession of top talents. Among them: Kristen Bell and her husband, Dax Shepard, John C. Reilly, Bebe Neuwirth, Luis Guzman, Debra Winger and more. Tom Waits is the narrator.

From the voices to the costuming of the show’s doll characters, the showrunner and his team have paid very close attention to the kinds of details that make this show’s make-believe world come vividly to life.

This is an unpredictable show that is full of surprises -- including sudden song-and-dance musical numbers that appear out of nowhere, but work perfectly. Simply put, “Ultra City Smiths” is ultra-entertaining.