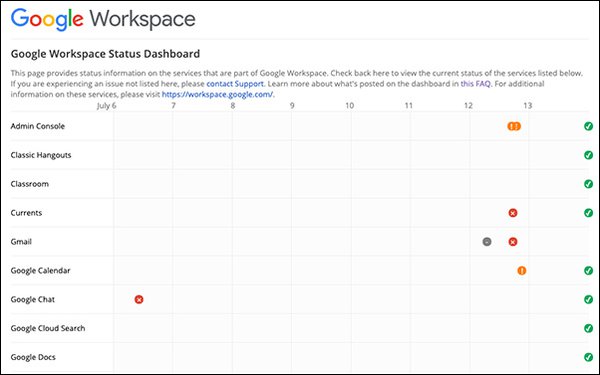 Google is updating its Workspace Status dashboard so it will alert users about outages, according to 9to5Google.

They could see the following with Key Details area: "New issue with Gmail and Admin Console." Those alerts will also include the time of the next update and the anticipated resolution.

In addition, the existing email alerts about outages have been enhanced to include “structured information such as key issue details, the status of the affected services, and a link to the Google Workspace Status Dashboard,” 9to5Google reports, quoting Google.

Google adds, “The subject of these emails will not change (it will still be “Google Workspace status alert”).

Any email routing or filtering based on the old sender address should be updated accordingly.”

Outages do occur. Earlier this year, Gmail and several other online services were hit by a massive internet outages.

The redesigned dashboard ensures that Gmail users will not have to scour around on downdetector to find out what is going on.

In a separate development, 9to5Google reports that the Gmail Go app has reached 500 million downloads on the Google Play Store.