You Don't Have to Be... JewBelong's Judaism Rebranding Project 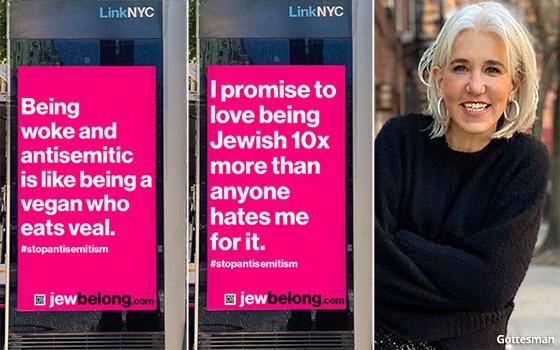 Even a crusty, jaded critic of the advertising industry’s many creative, social and moral lapses like me can be a sucker for a great ad concept. I’m not the only one here at MediaPost that has cracked a genuine grin over JewBelong’s current and past out-of-home campaigns on New York streets. We’ve already reported on the nonprofit organization aimed at educating both Jews and fellow-traveling Goyim like me about the faith and traditions.

This summer’s wake-up call about anti-Semitism will be seen in more urban centers shortly with clever messaging like: “Here’s an idea: Let’s ask everyone who’s wondering if antisemitism is real to wear a yarmulke for a week and then report back.”

Previous awareness campaigns have given us memes such as: “When you get back in touch with Judaism just to piss off your gentile mother-in-law.” And my personal favorite: “Everyone in Texas thinks you’re Jewish anyway.” We of a certain age can hear in these ads echoes of one of the great uses of New York culture and attitude in advertising history, the Levy rye-bread campaigns (“You Don’t Have to Be Jewish to Love Levy's”) of the 1960s.

So I had to talk to co-founder Archie Gottesman about a range of things — from the real impact of cause-related advertising, being snarky on bus shelters, and rebranding an entire religion.

MP: What was the impetus for the JewBelong organization?

Gottesman: The impetus originally was a lot longer than five years ago, which is when JewBelong started. And the impetus was [when] I met my husband Gary. We've been married like 27 years, so before that. Gary was United Methodist when we met. As we started realizing that we were falling in love with each other, I said you know I'm Jewish, and it's kind of hardwired in me, and I'm going to have Jewish children. If this is going to go any further, you've got to be Jewish, too. That was really important to me.

So he studied with a rabbi. It wasn’t very complicated or dramatic, I guess, but then what happens is -- and this gets to the branding -- I have this very amazing, willing new member of the tribe. I brought Gary to Jewish things. We lived in New York, there's a lot of Jews in New York. And I was always sort of disappointed with what Judaism looked like to Gary, who was a rookie.

So here he was new to the game, and I've been doing my whole life. I didn't even look at it like this is kind of a product, this is something that is vying for our time, like everything else that people choose to spend their time with. And I'm talking about people who are not very observant. If you're very observant, it's a different story. But for people like me, Judaism is part of my life. But it's not all of my life or even most.

So Gary and I would go to an event like Shabbat and be like, yeah that's not exactly what I mean, let's go somewhere else next week, like it's better than that. Like, if I want you to go to yoga and [we went] to class, and I didn't really like it that much, so it's like, yeah, you probably went to the wrong yoga class. That was like me and Gary in Judaism. I realized a long time ago because of that, Judaism has a little bit of a branding problem. There's a tradition in it, and, by the way, I think this is with almost all organized religions, because there are a lot of rules.

I decided to start collecting resources  I thought were really beautiful. I do speak a little Hebrew, but not nearly enough to understand the prayers. And I collected them over the years, and we had three children, and we would do Shabbat from the stuff I collected. And five years ago, I sort of made a change in my life and decided to put all of those resources and more online and call it JewBelong. And that's how JewBelong came to be a thing, because I certainly wasn't the only one who thought that Judaism had a little bit of a branding problem.

MP: What is the intended impact for the current campaign targeting anti-Semitism? And when you come up with clever messaging like this, do you have in mind an ideal audience?

Gottesman: It's usually not pre-thought-through. I think with the anti-Semitism, even though the campaign's been up for more than a month, I honestly am appalled by how little anti-Semitism is talked about in the news, by Jews, by people who aren't Jewish, by everybody. It's this growing hate in America that is palpable. I read about it all the time, and I just think it's terrible, and I want to shout it from the rooftops. Instead, I put billboards up.

In terms of the audience, it's everybody, but there are a lot of Jewish people who respond to it and say, Oh, my goodness, thank you so much for doing that. I don't know why there's not more about anti-Semitism. One person literally messaged us and said, How long is it going to be up? I live four states away, but I'm going to get to New York City. She wanted to see the ads that were in Times Square. I am going to get myself to New York City because I don't even have the words to tell you how happy I am to see this online, and I want to see it in person.

So that's really touching. And then, in general, just to get the words into the conversation, for people to be talking about it. So it's really an everybody kind of an audience we’re looking for. I guess Jews are most interested.

MP: You're leaning a lot on out-of-home, and I'm curious about that decision. What is it that you're trying to achieve with out-of-home?

Gottesman: I hope this doesn't sound too unscientific, but that's my background. Stacey Stuart, who's my co-founder of JewBelong, and I did the branding for a company called Manhattan Mini Storage in New York City for 20 years together. And we had billboards, because the billboards were on the storage building. It wasn't that strategic. We just were able to put stuff up on billboards. And I learned by doing, by having those billboards as a medium, that the way to catch New Yorkers’ attention was to say things that were just a little snarky, compelling.

One of our famous billboards was: “If you don't like gay marriage, don't get gay married.” And you know, that was back when gay marriage was becoming legal. Stacy and I really used pop culture to gain attention, and in New York, we became kind of iconic because people were like, oh, I get it. So billboards really became a medium I was very comfortable with.

I have a sense of words. Our best billboards are just words, no visuals. You can’t really have more than eight or nine words on it, otherwise people are going to miss it because they're driving too quickly. So it's just a space where I feel really comfortable, like a quick line, a little wit usually, something that makes you think, and that's why we did it. 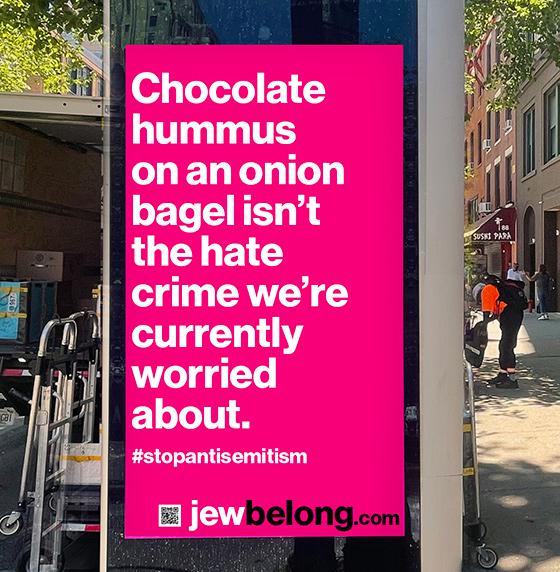 MP: Are there KPIs attached to these OOH campaigns?

Gottesman: Well, the outdoor campaign is about a month or a little bit older than a month. And so we're really looking at the conversation that we are receiving from people who are seeing the ads and pushing them back out on our social, which is mostly Instagram and Facebook. That's where we’re really liked. So it's not as scientific.

Obviously, when you buy a billboard, they say this is going to be a million views, and this would be 4 million views. But I also really believed, especially for right now, that just being up in Times Square and us being able to push that out … was going to make it worthwhile. And now we're going to be adding it to other cities. So I guess it's a little bit of science.

There's a lot of other people doing the work for you because when everybody takes the pictures of the ad and posts them, then they're doing part of the work. That's why compelling branding is really important, because if it looks great. I'm going to take a picture and send it. That's the ultimate way. Obviously, it's always hard to know what is really viral, but, for JewBelong, that's great when that happens.

MP: With your larger efforts, you also seem to be targeting people like me, who you might describe as Jewish-adjacent. How is that part of the rebranding of Judaism?

Gottesman: Judaism can be an intimidating religion, as can other organized religions. In this world, everyone wants meaning, and usually people get their meaning from wherever they decide to find it. Judaism is a religion that is full of meaning. And I don't mean like high observances.

There are certain hardcore values that it taught me, and it's about community, and it's about family and education and just certain things that help me define and center myself in what can be a really difficult, complicated world. Those are not intimidating values at all, and that's what Judaism means to me.

So the branding problem, I think, is that Judaism doesn't lead with that. ... It sort of leads, oftentimes, with rules. That's a big mistake. If I said, well, I'm Jewish because I think it's about love, that's a lot different than I'm Jewish because it teaches me about what I can eat and what I can't eat. That's a very large statement, but it's really true to me, it sort of helps to be much more of a value guidepost in life — and that is what JewBelong talks about on our website.

MP: When we’re discussing branding Judaism, you're on the edge of a larger issue that is going to come up over the next five to 10 years, which is branding multiculturalism generally.

Gottesman: I think people get nervous. Uh-oh, multiculturalism, well there go the Jews. There's a fear that culture will get sort of erased. When talking to people of different cultures, there’s the fear of, well, are you really going to keep any of the Judaism in? Are you really going to keep any Asian traditions? Or is it all just going to be this sort of vanilla America. I mean, I'm a proud American, but I think that's what happens.

It's almost like a tension that is both good and bad. I don't think it's ever going to be perfected because different people have different comfort levels with culture. But I think it's beautiful, I really do, when people are proud of their traditions and proud of their culture and then also really interested in maybe their spouse’s. It can be amazing.

It's when they are erased, personally, I find sad. So much of who we are comes from our ancestors. That's with everybody, and it can be really special.